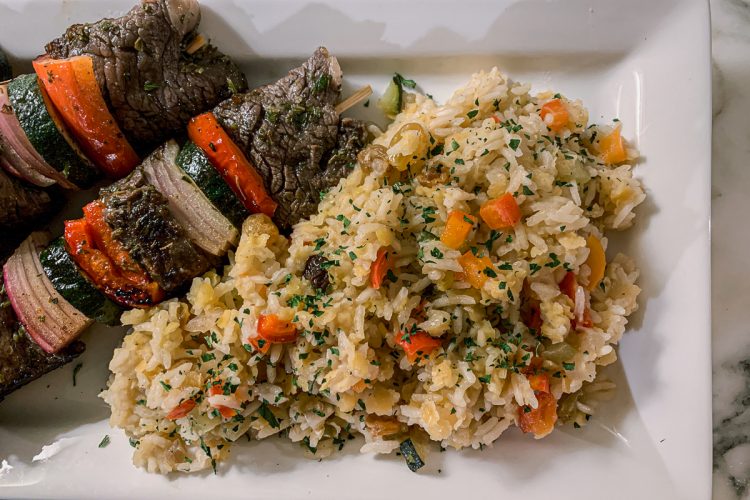 When I was young, one of my favorite side dishes that my mother would make was rice pilaf. Now, she never really made it from scratch. She used a popular commercial brand available through the US (it still is). I loved the flavor and the buttery texture. She didn’t make it often, but when she did, I devoured it. Years later, when I began to cook, I decided that rice pilaf was one of the first things I would teach myself. Thirty years later, I am still learning. I have never quite achieved the exact flavors of that boxed stuff from when I was a kid — but that is no longer my target. Today, I’m sharing one of my interpretations of Rice Pilaf. Along with my Batta Harra, today’s post is part of my series on side dishes.

When I first set out to learn pilaf, I did try to get as close to the ‘box’ as possible. To me, that WAS rice pilaf. What I’ve learned since is that there are almost as many variations on pilaf as there are grains of rice! I would try it at restaurants, and for the most part, it was different than ’the box’. Delicious never the less, which helped to open my eyes to the variations.  I most remember an amazing pilav at a Turkish restaurant in London.

Learning by Watching Others

When I started cooking professionally, I saw all the different ways other chefs make rice pilaf. Again, no two have been the same. It has all depended on what was available and how many people we were feeding. At one point, I was making pilaf for over 200 people a day. Suffice to say, the most ‘traditional’ recipes aren’t followed for that volume.  What we produced was a rough approximation of pilaf. Only the toasted orzo would really let you know you were having pilaf.

As I approached this blog post, I also did some research about what exactly is rice pilaf. I had allows considered it a ‘middle eastern’ dish. I most closely associated it with the regions around Turkey and Iran. It turns out there is a long history! Some scholars suggest that what we rice pilaf originated as far back in 2 AD in the southern part of India.  Some speculate that the Indian Biryani evolved into modern pilaf.

Still others think it went the other way around. Some historians believe that in later half of the eighth century pilaf originated in the Abbasid Caliphate in the region of modern Iran. The dish spread far and wide, and was a precursor to both paella in Spain and the Biryani in India.

Regardless of which version you believe, it is clear that pilaf has been around a long time. Not only has it been around a long time, it is a truly global food.  I have to admit that I was surprised when I learned how very widespread Rice Pilaf is. Version exist as widespread as Bangladesh to Brazil. You can find variations in the Caribbean, Central Asia, India, and Russia. And of course for our purposes, it is part of the Mediterranean cuisines of Turkey, Greece, France, and the Eastern Mediterranean.

Through it all, I have developed my own approach.  My approach relies on a pattern for the ingredients, and less about any specific recipe. At its most basic, rice pilaf is a formula which leaves TONS of room for interpretation and variation. Most often (but not uniquely) made with rice coated in a fat. Pilaf often includes a second, toasted grain, as well as seasonings, vegetables and meats.  Liquid is added and cooked until fully absorbed.

I like to start with a basic unit of rice (let’s say 1 cup). Then I prepare and equal measure of diced vegetables, and it doesn’t really matter what I use. Add a quarter portion (1/4 cup) of a toasted grain, typically orzo, though sometimes lentils or bulger. I sauté the vegetables in butter, then added the rice and toasted grains to coat. Finally, I add my seasonings, and liquid then cook it.

There are a few importants step not to overlook in preparing pilaf. The first is to soak the rice to rinse it before cooking it. I soak mine in cool water for about 3 minutes. I change the water about every minute to help wash away extra starch. This helps the rice ultimately be fluffy and not sticky. When I have skipped this step, I have always regretted it, so I say don’t skip it.

The second key step is to cook the rice grains in fat before adding your cooking liquid. This is really the key step that distinguishes pilaf from other preparations of rice. It doesn’t matter what fat you use, just that you do it. I happen to like butter, but olive oil and ghee work just as well. Along with washing the grains, it helps keep the rice fluffy.

To cook, I have adopted the French method of cooking in a cover pan in the oven. So after sautéing everyone, I move it to a separate dish, add my liquid and cover. For a liquid, I used between 1 3/4 to 2 1/4 times the amount of rice I’ve used. It depends both on the type of rice and how much water the second grain might need.  To wrap, first I lay a small piece of parchment on top of the rice, which mostly, but not totally, covers it. Next, I wrap the whole dish in aluminum foil.I bake in a 350F/180C oven for about 30 – 40 minutes until fully cooked.

For today’s recipe, I used a long grain rice and lentils. My rice pilaf was to go with on of my favorite kebab recipes. I really like the Mediterranean Beef Kabobs from A Cedar Spoon. I used diced ends and bits of the same vegetables from the kebobs as my vegetable. To keep the dish vegetarian, I used a vegetable stock, and added no meat.

That is really all there is too it. If you would rather cook it on a stove top, that is OK too. I will cover the specifics of that in a later post. But generally, you make it in a single pot.   When you add your cooking liquid, cover it, reduce to a simmer and wait until it is fully cooked.

Occaisionally, I still go back to the “box” for a guilty pleasure.  It reminds me of childhood.  But I No longer view it a THE Rice Pilaf.  And although I thought Rice Pilaf was a Mediterranean Dish, via the Middle East that is just part of the story. It is truly a global dish. That is because it is easy, quick and delicious. I consider it a side because my Rice Pilaf is meatless. However, if you want to add meats, you can create a one dish meal as well. There is a reason the world has been eating this for over 2000 years. Give it a try – you can’t go wrong. 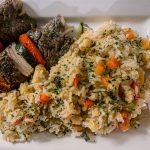