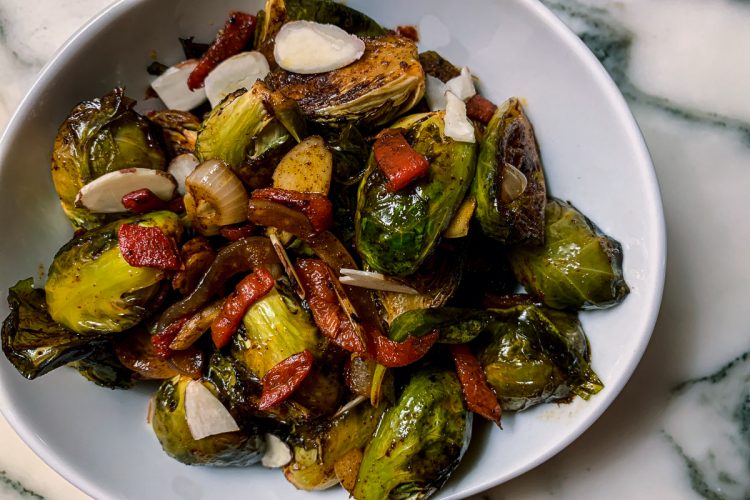 I was weird as a kid because I liked Brussels Sprouts.  They were my favorite vegetable growing up.  Ok — probably other reasons I was weird.  But you have to admit, Brussels sprouts and kids usually involves a lot of rejection and denial.  But not me — I loved them.  They were one of the few vegetables my Mom would serve that I would look forward to.  She never did anything particularly ‘fancy’ to them.  She always steamed them, and then tossed with some butter and salt.  That’s it.  I still love Brussels sprouts, but my tastes have matured considerably.  I recently tried adapting one of my Brussels sprouts recipes.  The idea was to incorporate some of the flavors from Spain that I love.  The result is today’s Sweet and Smoky Brussels sprouts.  I hope you love them as much as I do.

When I am seeking out inspiration for Spanish flavors, I have one go to starting place. I get out my copy of The Foods and Wines of Spain, by Penelope Casas. When I decided years ago that I wanted to explore the foods of Spain, it was the first book I got my hands on. This was long before Spanish Cuisine and tapas bars were common in the States. And there weren’t many options for cookbooks either. Casas’s book was one of the first to bring recognition to America of the culinary excellence of Spain. Although there aren’t any pictures, the cookbook is an amazing collection of Spanish Cuisine and how to prepare it at home. And the book still holds up well today.

Before I committed to Spanish inspired Sweet and Smoky Brussels sprouts, I wanted to know if sprouts were part of a Spanish diet. I got out Food and Wines of Spain, and right there on page 90 was a recipe for Coles de Bruselas Salteados – Sautéed Brussels sprouts.  That was a good sign, since most of my Brussels sprouts preparations include sautéing.  I read through the recipe, and decided that I could make (more than) a few changes to achieve what I was looking for.

Mostly, I wanted to bring deeper flavors to the dish.  To get a sweet and smoky combination, I am adding honey and smoked paprika.  I’ll also par-roast the Brussels sprouts before sautéing them.  I also include a couple of other flavors from onions and piquillo peppers.  You do remember my love for piquillo peppers, right?   So I found a place for them here, and I think they work perfectly.  Finally, I top it all of with some slice almonds.  All of the flavors combine to create Sweet and Smoky Brussels sprouts.

Even cut in half, Brussels sprouts are too dense to cook fully by sautéing alone.  You need to par cook them first, before finishing them with a saute. One common way to par cook Brussels sprouts is to cook them in boiling water – blanching.  That method is fine, and works in a great many dishes.  But in my opinion it adds nothing to the flavor of the Brussels sprouts, so I seldom use it.  I am personally in favor of roasting.

Roasting Brussels sprouts begins the process of caramelizing them.  Two great things happen when that occurs.  First, you bring out the natural sweetness hidden the the somewhat bitter sprouts.  It helps to balance the flavor of the sprouts and makes them more delicious.   Second, it adds color, deepening the green.  The sprouts will also begin to brown in some spots.  And others will char nicely. Some of the outer leaves will become blackened and brittle. These loose leaves are a bit of a guilty pleasure for me when I make Brussels sprouts.  I gather up the leaves left on the baking sheet after roasting and eat them as ‘Brussels sprout chips’ –  absolutely delicious.

How do you roast Brussels sprouts? It’s really easy.  Preheat your oven to 350F/180C.  While the oven is warming, trim and half your Brussels sprouts.  To trim, take a bit of the hard stem off the bottom of the sprout.  No need to completely remove the stem, just the hardened outer surface.  Next cut them in half through the top.  If some of the sprouts are smaller, it is OK to leave them whole.  In the process of trimming and halving, you will lose some of the looser outer leaves.  That’s OK, don’t worry to much about that.  They make great compost.

Roasting to Develop a Deeper Flavor

Next get a large bowl to put all your halves into.  Drizzle with olive oil, and season with salt and pepper.  Toss to evenly coat all of the sprouts, top and bottom.  Dump the seasoned sprouts on a large baking sheet. Then take a moment to turn them all so that the cut side is face down on the sheet pan.  You’ll end up with a pan that looks like so many miniature green igloos.  Place them in the preheated oven for 25 minutes.

You do not need to cook these all the way through — you will finish them when you sautee them.  But you do want them soft enough to ‘give’ a little when pressed on.  The cut bottoms, which were in direct contact with the hot sheet pan, will have begun to caramelize and have a golden-green tone to them.  They are now just right to move onto the next step.

While the Brussels sprouts are roasting, you can get the rest of your ingredients ready.  Garlic, Onions, Peppers, and some almonds are added to the sprouts.  You’ll also add smoked paprika, salt and pepper.  The smoked paprika and the charred sprouts are the ‘smoky’ part of Sweet and Smoky Brussels sprouts. You get the ‘sweet’ part with a blend of a honey and a flavored vinegar.  I used sherry vinegar, but apple cider or champagne would work equally well.  The acid of the vinegar pulls all the flavors together, and the honey is, well, sweet.

Once the sprouts are out of the oven, it’s time to complete the dish.  This doesn’t really take a long time, so you want to have your ingredients ready.  The first thing to do is to give the olive oil a garlic flavor.  Heat the oil over medium high heat in a large skillet.

Add the roughly chopped garlic and cook until lightly browned on all sides.  I didn’t want the garlic pieces in the finished dish, so I removed them.  If you would rather leave it, go ahead.  Just don’t let it brown so much before moving on to the next step.

When the garlic is cooked, introduce the smoked paprika to the oil to give it time to bloom. Perhaps you remember blooming spices from this post on batata harra. Add the smoked paprika to the oil and allow it to cook until it gently bubbles and starts to smell fragrant. By infusing the oil with the paprika this way, you’ll get a more even coating of flavor on the Brussels sprouts.

Add the Brussels sprouts and onions.  Toss in the paprika oil to thoroughly coat everything.   Allow to cook until the onions just begin to turn translucent.  Add the piquillo pepper strips and cook until just heated through.  Combine the sherry vinegar and honey to create a syrup.  Pour over the Brussels sprouts and toss to evenly coat with the honey mixture.  Bring to a gentle simmer and cook until the liquid evaporates, stirring frequently.  Remove from heat, toss with the almonds, and serve hot.  That’s it.  Easy.  And Delicious!!

I hope you enjoy the Sweet and Smoky Brussels sprouts.  If you do, please leave a comment below, or share on social media.  I would appreciate it. 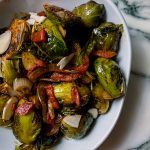