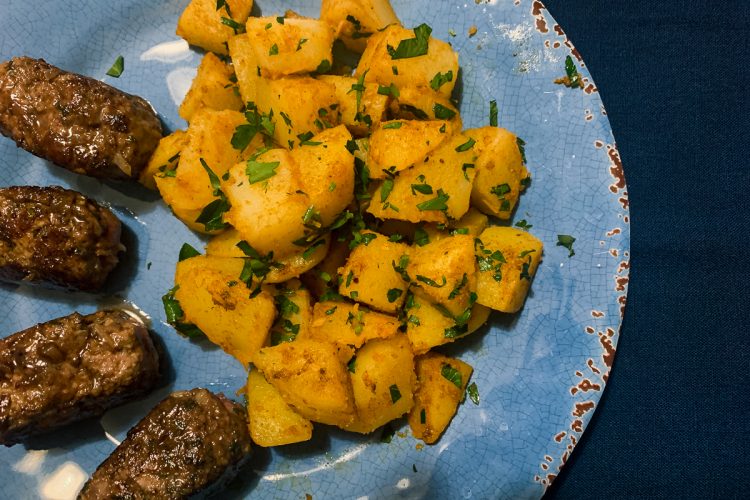 For the past several weeks, I have been sharing main dishes and winter soups with you. This week, I thought I’d change up the focus a bit and share a side dish or two. For the next few weeks, I’ll be sharing a few of my favorite side dishes, starting this week with a potato dish. Here is my version of spiced fried potatoes inspired by Lebanese Cuisine.  Spicy Lebanese Style Potatoes – Batata Harra.

Batata Harra is the Arabic phrase for ‘spicy potatoes’.  It is also a dish popular in Lebanon and other parts of the Middle East. Sometimes served with red peppers, Batata Harra can be a stand alone meal, a side dish or a part of a mezze platter.  The flavors are characterized by warm Middle Eastern spices such as coriander, cumin, and Aleppo pepper.  It is the Aleppo pepper that brings the ‘spicy’ to the Spicy Lebanese Style Potatoes.

It would be tempting to call these potatoes ‘home fries’, but that would be over simplifying by a lot. Yes, they are pan fried potatoes. Yes, you par cook the potatoes first. But no, they are not home fries. They clearly are potato ‘cousins’ – but not the same thing. Batata Harra is finished not only with some salt, but also lemon juice and cilantro. The last two give these potatoes a zesty twist and make them so much more than home fries!

The basic process for preparing Spicy Lebanese Style Potatoes is pretty simple. Par cook the potatoes.  Heat your spices in some oil. Toss the par cooked potatoes in the spiced oil. Fry until crispy.  Finish with some lemon juice and cilantro. It really is quite easy.

To par cook the potatoes bring a pot of water and 1 tablespoon of kosher salt to a boil. While the water is heating, peel the potatoes, and cut into one inch cubes. Once the water is boiling, carefully add the potatoes. Bring the water back to a boil, then reduce the heat to a simmer. Let the potatoes simmer until they are finished par cooking. You will know when that is when the tip of a paring knife easily slides into the center of a potato piece. Remove the potatoes from the heat, drain and set aside.

Moving onto the frying step, you want to start with the right pan. Do not use a non-stick pan. You will not easily be able to develop crispy edges on the potatoes, leaving them browned and soft. Instead, opt for a cast iron pan or a heavy bottomed stainless steel pan. You want something that will hold some heat, and the will allow your potatoes to get a crust on the edges.

Once you have the right pan it is time to create the spice blend. I like to add my spices to the oil before I add the potatoes. In technical terms, this is called ‘blooming’ the spices. Technical name or not, it serves two distinct purposes. The first is to help distribute the flavor of the spices more evenly. By creating a ‘liquid’ compound, the spices combine more evenly. More importantly, they will coat the surface of the potatoes more evenly as well.

Second heating up the spices in oil releases fat-soluble flavor compounds.  These compounds are in spices like cumin and coriander, which are prominent in our recipe. More flavor is actually released from the spices when they are heated in the oil. That is because ‘fat’ is what brings those flavors out and it means that you are getting more spice bang for your buck.

So to make this happen, put your skillet on medium high heat, then add the oil. Give it a few seconds until the oil starts to ‘shimmer’. Once it is shimmering, add the spices — cumin, coriander, Aleppo pepper and garlic. Stir them around in the oil and allow them to heat up. Keep stirring gently for about a minute. You’ll begin to smell the fragrant spices and when you do, you’ll know it is time to move on to the next step. Blooming spices doesn’t take long, but it really adds a whole new depth to the flavor of the spices.

Play With the Spicy Level

Another thing to keep in mind is that you get to control how ‘spicy’ you want your Spicy Lebanese Style Potatoes.  Add more or less Aleppo pepper depending on how ‘hot’ you want the potatoes. I like them quite spicy, but the Elegant Baker, less spicy. So I tend to cut back on the Aleppo pepper. I can always add heat later, but I can’t take it away once added. But don’t skip the spicy entirely. It really makes a difference in the finished dish. If you just sprinkle pepper on at the end, you miss all the benefits of blooming at least some of the Aleppo pepper.

When you are happy with the spices, it is time to add the par cooked (and drained) potatoes. Put them in the pan, and toss them all around to coat every with the spiced oil. Once that is done, let them sit for several minutes untouched. The idea is to build up a ‘crispy’ side to the potatoes.

Altogether, your potatoes will pan fry in the spiced oil for eight to ten minutes. You will only want to stir one or two times during the cooking. To allow several sides of the potatoes to get crispy. If you leave them be without any stirring, you will end up with on very crispy, probably burnt, side to the potatoes. The rest will be soft and squishy. If you turn to much, you will end up with no crispy sides. You need to allow the potatoes to sit and crisp up a bit, and then move them. This will leave you time to turn the potatoes maybe only once or twice. That is OK.

When the potatoes are heated through, it is time to finish them. This is really the trick the brings the best flavor to the Spicy Lebanese Style Potatoes. Take them off the heat and add the juice of one lemon. The residual heat from the pan will help cook of the liquid, but the zesty, lemony flavor will be left behind. Toss with some cilantro for additional flavor and color, and there you have it. Done. 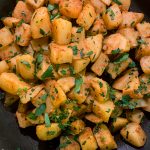