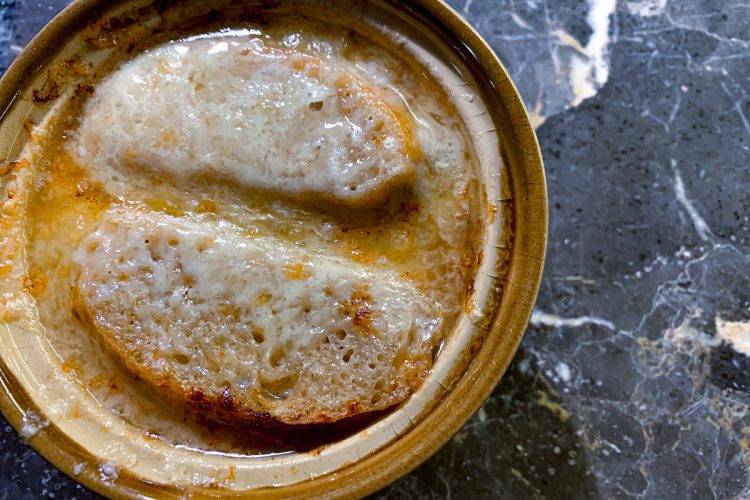 I think that it is well established by now that I am not really a fan of January. The old year is over, and with it went the cheery holiday season. And things don’t really pick up in the new year until February. My family celebrates several birthday’s in February, plus Valentines day.  On balance February is a much more festive month than January. But here we are stuck in January. So I perk my self up in January with some of my favorite foods, including the subject of today’s post. I have been a fan on French Onion Soup since I was a kid, and today l’ll share my recipe for this cold January treat.

When I was young, we didn’t go out to eat much. If we did it was for a special occasion. And then, there were only two restaurants we went to, neither of which is around any more. If you grew up in the north of Boston area, perhaps you’ll remember them. For “ordinary” special occasions (birthdays, etc), we went to an Italian restaurant, Augustine’s. It was a typical ‘red sauce’ restaurant with fake fresco and good garlic bread.  It’s real quirk they had an organist playing on a rotating dais in the middle of the dining room. Always an older woman, and dressed for an elegant evening out, and wearing sneakers. Looking back, it was kind of ‘campy’, but as a kid, it was ‘fun’.

For “extra-special” occasions (graduations, anniversaries, etc), we went to The Commodore.  It was an old line American “fancy” surf and turf place. They had a waterwheel fountain wishing well when you walked in the door. They served a delicious pub cheddar spread, one of my two favorite things about dining there. The second was their “fancy” French Onion Soup. To be honest, as a kid the part that I craved was that gooey cheesy top. I always got it as my ‘starter’, and I’ve been hooked on French Onion Soup ever since.

As I got older, and began cooking, I started making my own.  I have had years of ‘trial and error’ practice.  The advent of the internet has accelerated my learning, and I am now at a point where I am happy with what I make.  But I’ll probably continuing refining it, so what you are getting is my favorite version today.

OK, Where It Really All Began …

Of course, the chef at the Commodore didn’t’ invent French Onion Soup.  On no, it is much older than that.  As a regular reader, you probably know already the origin of most of the classic Mediterranean dishes.  That’s right.  The Romans.  There is strong evidence that the Romans and Greeks were making onion soups thousands of years ago.  Certainly, they weren’t melting a nice Swiss Gruyer cheese on top, but they were cooking the onions into a soup.

It makes sense that onion soup has such a long history.  Through most of the history it was considered a ‘peasant’ food.  Cheap, easily accessible onions.  Water. Perhaps some stale bread.  A poor person’s meal.

There are several legends, both probably apocryphal, involving King Louis XV, and his role in ‘inventing’ the soup.  The stories are highly unlikely since written recipes can be found both 12th and 17th century French cookbooks.  Both before Louis XV ascended to the throne.   By the 18th century, onion soup was a staple food for both breakfast and lunch at the famed Les Halles market in Paris.  By the 19th century, local restaurant began to ‘dress up the soup’ by melting cheese on top, and the French Onion soup we know today arrived.

In the 1860’s, the soup made its way across the Atlantic and first appeared on the menu of a New York City restaurant.  One hundred years later, French Onion Soup had a resurgence of popularity in the US.  By this point, upscale restaurants across the country featured the soup as a high end appetizer.  And so it came to the Commodore Restaurant.  For more on the history of French Onion Soup try here and here.

The soup has only a few ingredients, and is relatively easy to make.  A few extra steps, and you get that dramatic and cheesy topping that hooked me as a kid.  The process isn’t necessarily long, but I wouldn’t call this a ‘quick’ meal either.  Softening and caramelizing the onions does take some time, but not a lot of effort.

I’ve tried all sorts of ‘variations’ and ‘shortcuts’ along the way.  Some of the ‘variations’ were good (port instead of white wine).  None of the shortcuts were worth it (with one exceptions, discussed below).  Onion soup is one of those recipes where you really have to take the time to do it right.  As I said, it’s not hard.  But it does take some time.  I also learned a few things along the way that hopefully, you’ll find useful too. Here are my “Rules”:

With so few ingredients, the quality of the ingredients is very important. Use the best quality you can find for each ingredient.

Take your time with the onions.  There is a balance between nicely caramelized softened and sweet’ and overcooked ‘burnt and bitter’.  Don’t cross the line. Period.

Don’t skip the alcohol for deglazing the pan.  I prefer port, but sherry, white wine, brandy, red wine and even cognac.  Use what you like, but don’t skip it.  It deepens the flavor of the soup.

Don’t be shy on the cheese, and get a nice, melty Swiss — Gruyer or Emmentaler.

That’s it — those are all the rules for a good French Onion Soup.  That’s not to say that there aren’t a few tips I can pass along to help the process.  For one, I don’t use the same kind of pan most others do for this.  I don’t use a big stock pot, or a heavy dutch oven.  I use a wide, flat bottomed skillet with straight sides.  The wide, heavy bottom pan helps make sure I can spread the onions out as much as possible.  This promotes both even cooking, as onions aren’t crowded on top of each other.  It is not essential to use this kind of pan, but if you have one, I strongly recommend it.

For Onions, I prefer sweet onions such as Vadalia. They require the least work to bring the most flavor. Other onions can work, but sweet ones are the best. I also use an approximately equal ratio of cut onions to stock. For example, in the recipe below, the two large Vadalia onions yield about 4 cups of cut onion slices. I also use about 4 cups of stock. Of course the onions reduce to about a cup of onions once simmered. If you start with approximately equal ratios, you’ll end up with a well balanced soup.

It is best if you toast your bread first.  Soft bread will turn to mush when the liquid is added, and you don’t really want that.   Toasted bread will stand up to the soup longer, and make for a better topping.

The final “tip” is to melt the cheese under a broiler.  No need to ‘bake’ the soup with the bread and cheese for 45 minutes in the oven.  This is the one short cut worth it.  The broiler will melt the cheese just fine.

If you look at enough recipes for French Onion Soup, you will find all kinds of  variations.  They are generally unnecessary.  You will find tips to ‘thicken’ the soup with flour, milk, or eggs.  There are no need for any of these.  It is not a stew or cream of onion soup.  Save the thickeners.

Some recipes will tell you to add baking soda to the onions while you caramelize them to ‘speed’ the process.  First — remember the rule above.  Take you time with the onions, you’ll be rewarded.  So no, you don’t need to speed the process.  Second, the baking soda will tend to turn you onions into a pile of onion mush.  That will do nothing to improve the quality of your soup.  Skip the baking soda.

Many recipes also call for the addition of sugars. Brown sugar, granulated sugar, or confectioners sugar.  The claim is they help to brown and sweeten the onions.  There may be something to this, but I generally avoid it.  I use sweet onions to begin with, and they don’t need the extra sugar.  When I’ve added it, the onions were too sweet, almost like candy.

IF your onions are still a bit on the bitter side after they begin to brown, a teaspoon or two of confectionary sugar can help erase the bitterness.  But use it sparingly, because too much can also turn the onions to mush.  Don’t rely on extra sugar to help with browning though.  Then the sugar is browning and not the onions.  Use this ‘trick’ with care.

The soup in the pictures took two hours from beginning to end.  Most of that time I spent watching a hockey game, and not really working on the soup.  The stovetop did most of the work coloring and softening the onions.  A gentle stir every twenty minutes.  Then onions alone took one hour and forty minutes.   You’ll notice I didn’t let the onions get ‘too’ brown.

My real effort was the last twenty minutes.  Adding stock, prepping the bread for toppings, and shredding cheeses. Nothing difficult.  I should also note that I used homemade chicken stock in this soup.  My preference would be homemade beef stock but I didn’t have any.  I had store bought beef stock, but opted to use my homemade chicken stock.   Several years back, I watched Julia Child and Jacques Pepin make a French Onion Soup. They used chicken and not beef stock.  Ever since then, I  haven’t been ‘afraid’ of using chicken, as long as I remember my rules.

Low effort.  Chicken not Beef Stock.  No added sugar.  And still dinner was deliciuos.  The Elegant Baker has already asked for me to make it again soon while the weather is still cold.  I think I will, because I like it too.  And so will you if you give a nice homemade French Onion Soup a try.

Note: It is difficult to offer a precise time on how long it will take the onions to brown. There are a variety of factors that impact that. Each stove top heats slightly differently. Your medium low may not be the same as mine. The size and shape of your onions, and the pan you are cooking them in will be different. How fresh (wet) are the onions? The wetter, the longer the cooking time. The point is not two situations are identical. There is no “cook to 165F” instruction you can measure with a tool. You have to use your eyes and your judgment, and really you can’t be wrong. The longer you cook the onions, the more complex the flavor. That said, when you’re happy with it, you can stop. There are no French Onion Soup Gendarmes coming for you if you like it a little less caramelized than someone else. If you want to cook for only two, you can save the unused soup to heat again later for another meal. It also freezes well. Finally, if you want to, it would make an amazing base for another soup if you would like.