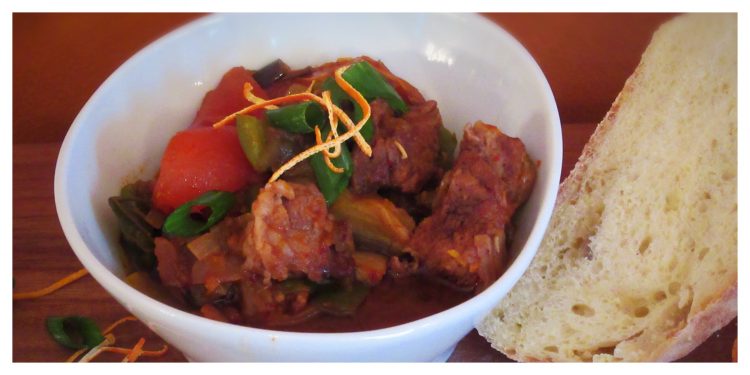 The calendar says it has turned to spring, but here in New England, you would never know it. Winter still has us in its icy clutches, and as I sit here writing, there is a foot of snow in my yard. Yet another big storm brings its icy payload to visit. I long for Spring and Summers lighter foods. Yet, the current conditions are encouraging me more towards hearty comfort foods. Growing up, this would be the weather my mother would use as an excuse to make her beef stew. Today, we’re having a Turkish variety of beef stew called a güveç

All around the Eastern Mediterranean, you will find stews and casseroles made from local, seasonal ingredients. In the Balkan countries, the variation “duvec” is uses more commonly. Güveç gets its name from the earthenware pot it is traditionally cooked in, which is also called a güveç. It consists of vegetables, meat, and a pepper based seasoning. I find that güveç is more like the daube from Provence, although it is often compared to ratatouille. Both are traditionally slow cooked in an earthenware pot. Both contain little added liquid (wine with a daube), and are ideal for tougher cuts of meat.

A güveç is a hardy one pot meal that adapts to the modern kitchen.  Simply, güveç is a Turkish beef stew

Having made many beef stews before, I find it intriguing to try this variety. The recipe we’re using today is an adaptation from the wonderful cookbook Istanbul and Beyond by Robyn Eckhardt. I’ve not yet used any eggplant in a beef stew (not a big fan of eggplant), but I’m willing to give it a go here. On the other hand, I love shredding carrots into a dishes that will cook long and slow. The shredded carrot melts away. But it adds an underlying sweetness that really deepens the flavor in dish.

I found almost all the ingredients here at my local supermarket, with one exception.  I got the Turkish Pepper Paste at a local halal market that specializes in Mediterranean and Middle Eastern products.  Pepper paste can be made at home (look for recipe here soon), but the jarred variety was fine.  You can substitute tomato paste, making everything available at one market. But I think you sacrifice a depth of flavor in doing so.   I recommend you seek out the Turkish Pepper paste.

I’m looking for my stew to cook all day, so I want to lengthen the cooking time called for in the original recipe. That means that I’ll need to drop the temperature, and go for more of a ‘low and slow’ approach. Also, I’ll want to cover it, or it will completely cook off all the liquid. I’ve cooked this is my cast iron dutch oven in the oven. You could also prepare güveç in a crock pot, with equally as satisfying results! Enjoy! 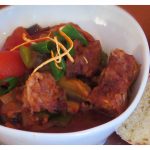