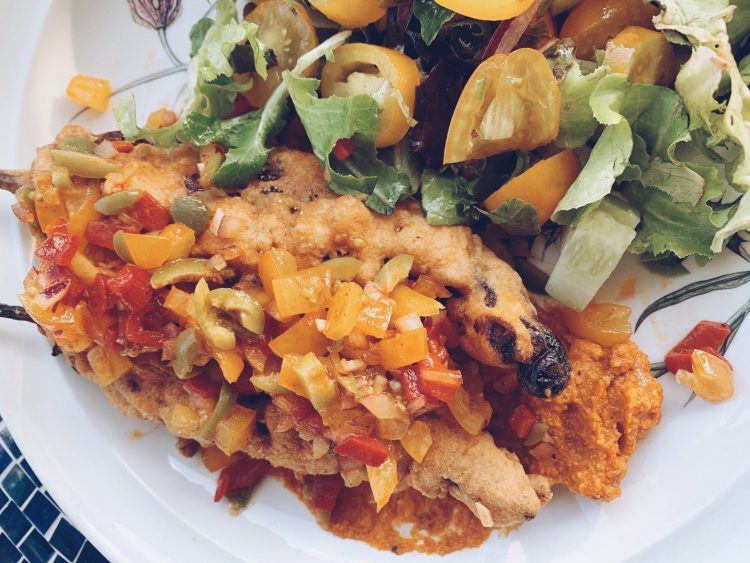 My Chili Rellenos with a Spanish Twist is a real international dish. We’ll start with the chili rellenos part, which is dish with Mexican origins. It is a dish where mild chili peppers (usually poblanos) roasted, stuffed and fried. That’s a triple play of flavor there!

My “international” version however uses Cornito Pepper, which is an American hybrid of an Italian frying pepper. I stuff them with mahon cheese and place them on a Spanish Romesco sauce bed. Finally, I top with a “salsa” with inspiration in Spanish flavors.

My first introduction to chili rellenos when living in Texas for nearly six years. I came to really enjoy the Tex Mex food, and anything stuffed with cheese was sure to be a hit. The technique is a bit tricky because first you roast the peppers, then stuff, then dip in an egg batter. Finally you deep fry them. But they are so worth it.

Here, I adapt the technique using different peppers, and a cheese from Spain. The topping salsa is a combination of pequillio peppers, green olives, tomatoes, and smoked paprika. I used yellow tomatoes to play with the red of the peppers, and to mirror the colors in Spain’s flag.

The thing that this dish really shows is that with a little bit of inventiveness, and you can adapt a recipe to mirror the flavors you want, even if different from the original. Always respect the original, but don’t be afraid to break a tradition or two once and a while. Enjoy! 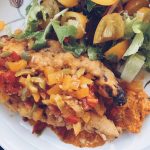 Chili Rellenos with a Spanish Twist