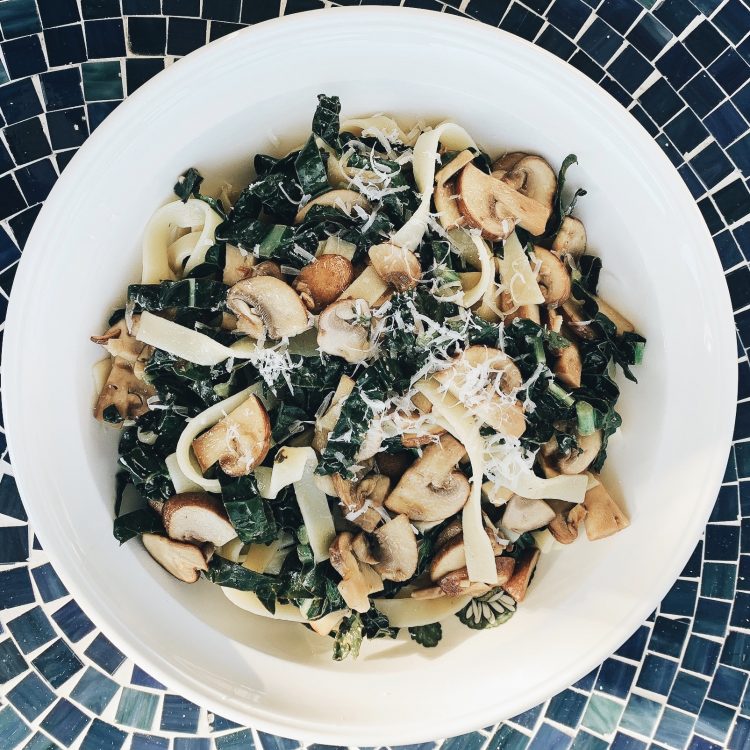 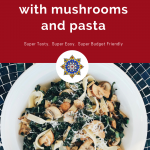 I have a confession to make.  It might surprise you, since today’s post is about Tuscan Kale, but I don’t really like kale.  I know it is supposed to be good for you, and that it is easy to grow, and good for the environment, and , and, and.  But I don’t really care for it.  That is, at least I thought I didn’t until recently.  Things changed.

First, let’s define what I mean when I say  “kale”.  Up until now, when I heard ‘kale’, my mind immediately imagined ‘curly’ kale.  That is the one most popular in North American grocery stores, restaurants, salad bars (will we ever even have those again?).  It is everywhere.  When I worked as a chef at a major grocery chain, we couldn’t stay ahead of the demand for kale dishes.  I would wash prep and turn into various dishes 50 pounds of kale a day.  It was all curly kale.

So it turns out I don’t care for curly kale.  I find the leaves tough and bitter.  The stalks have to be removed from almost all the leaves.  The curly-ness means more cleaning.  And I just don’t like the flavor.

But all that changed recently.  I was talking with my local farmer, and he offered me some kale.  In my experience, if Chris grows it, it is excellent and can always find a way to my table.  So I was a bit torn at the suggestion of ‘kale’.  I trust Chris, so I didn’t want to turn my nose up at his suggestions.  But kale!  I guess I didn’t rep[y quickly enough.  The next thing I heard was something like “it’s not curly kale, it’s lacinato kale”.   Lac-a-what kale?

I said sure, I’d give it a try.  Then I googled “lacinato kale”.  It turns out lacinato kale is just one name for this variety.  It also goes by Dinosaur Kale, Italian Kale, Tuscan Kale and Covol Nero.  The last couple of names there might give you a hint about the tie in with the  Mediterranean focus here.

The one that stuck out to me was “Tuscan Kale”.  It gave me the idea that this was something that I could work into the blog.  So I set off to learn about Tuscan Kale as I got ready to put a dish together.  What I learned is that Tuscan kale  is milder and sweeter than traditional “curly kale.” The stems are more tender, so there is less work stripping them.   We’ll see, it’s still kale.

So let’s start with how it looks.  Lacinato kale certainly looks different than curly kale.  The first obvious difference is that the leaves are much flatter, and don’t have the curled up edge.  The surface does have a bit of a ‘bumpiness’ to it.  This is where the name ‘dinosaur kale’ comes from since it bears some resemblance to dinosaur skin.  I’ve never actually seen a dinosaur, so I can’t actually vouch for that.

The next difference is the color.  It is a much deeper shade of green, a nearly black shade of forest green.  This is where the Italian name comes from.  The Italians call it ‘cavolo nero’ or literally ‘black cabbage’, which comes from the dark color.  The ‘cabbage’ part comes from the fact that all kale is in the same family as cabbage.

Turns out Tuscan Kale has been great a long time

As I read, I learned that Tuscan kale has long been a part of the cuisine of Italy.  It is used as a side dish or part of a main dish.  How long has it been part of the cuisine?  Well, there are records that date the use of kale to at least the Middle Ages, in the thirteenth century.  Probably before that.  So there is a long history of kale.  It must be good.

Everywhere I looked for information about Tuscan Kale, I kept seeing the same thing.  No matter where, they almost always said something to the effect “and of course Covolo Nero is essential to the famous Tuscan soup Ribollita”.  Looks like something I will have to check out later — like this winter.  Stay tuned for that.

I found inspiration for my dish at All Our Way,  an excellent blog from Marisa Franca Stewart.  She makes a warm sauteed side dish with Tuscan kale and mushrooms. I liked the idea  — I love mushrooms.  I thought even if I don’t like the kale at least I’ll have the mushrooms 🙂 . Then I thought that if I started with her basic  idea, but made it as a topping for pasta, it would be excellent.

So was born my recipe today for Tuscan Kale with Mushrooms and Pasta.  I am certain that I am not the first person to think of Tuscan Kale with pasta.  I’m not claiming any brilliance or invention.  But this is how I got there.  It turned out to be a great introduction to cooking with this kale.  The dish was easy, and the kale cooked just as I expected.

How it came together

A couple of things that I did in the process.  First, I chose to cut the kale into strips as opposed to chopping it.  I thought this would be more visually appealing with the pasta.  To that end, I also chose a ‘ribbon’ pasta — some fettuccine that I had on hand.  A pappardelle or tagliatelle would also work nice.  If you are feeling particularly adventurous, this might be a great use for my homemade pasta! Had I been using a different shape, I might have chopped roughly.

After I started the pasta water, I turned my attention to the garlic and mushrooms.  They went in the saute pan first, over a medium heat.  Tuscan kale is a hardy green, so it can take some heat.  I put the kale in with the mushrooms the same time the fettuccine went into the boiling water.  This allowed everything to come together and be finished at the same time.

Lastly, I added about a quarter cup of pasta water and olive oil just at the end before combining pasta in with the kale.  This is to create a slightly ‘creamy’ sauce that coats both the kale and the pasta.  Don’t worry if you add too much water. Just let it cook until it steams off and your ‘sauce’ is the desired creaminess.

So what did we think of the Tuscan Kale??  Well — both the Elegant Bake and I ended up LOVING it.  Neither of us really liked kale before, so frankly we were both surprised a little.    The Tuscan Kale is milder than ‘curly’ kale.  The leaves weren’t so tough.  Sauteed with the mushrooms and lemon juice, it was delicious and complemented the pasta perfectly.

I do wish I had taken more of the stems out.  Although they are not as tough as the stems on curly kale, they are more on the chewy side.  I probably should have cut the kale strips parallel to the stem instead of across it.  This would have allowed me to just cut around the stem.

But really, that was the only problem with this dish.

I can’t wait to get my hands on more of this kale — I have tons of ideas for what I could do with it. In soups.  With white beans,  I also know I can find many, many recipes on line to help inspire me.  I think that kale — Tuscan Kale — will now become a regular part of the diet.  That is not a bad thing. 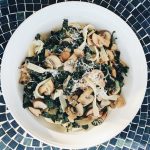 Tuscan Kale with Mushrooms and Pasta

The kale should cook down quite a bit and be tender.   As the pasta is finishing, scoop out about ¼ cup of the pasta water and add it to the kale