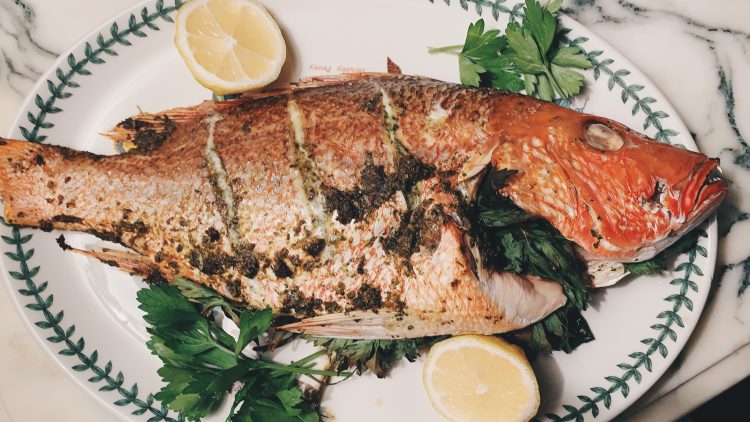 I am finally tackling a recipe that has long been on my culinary bucket list but that I haven’t gotten to before now.  I am talking about cooking a whole fish.  To cross this Rubicon, I have chosen a Whole Roast Snapper with Chermoula.   Chermoula is a North African marinade common in Morocco as a rub for fish.  It is good on other meats, such as lamb, but today we’re going to use chermoula on fish.

Why cook a whole fish?  For a few reasons.  One, it is so incredibly simple.  It is probably the easiest way to cook fish that there is.  Preparation is close to zero.  Two, it is outrageously delicious.  Whole fish does a much better job at keeping its own moisture, and taking on the flavor you offer it.  Together, that makes for one delicious fish.  Three — believe it or not, whole fish is one of the most common ways to eat fish throughout the world.  Especially in the Mediterranean.  The process of eating a whole fish causes you to slow down your meal and savor both the food and your company.  That is a hat trick of great reasons if there ever was one!

Another consideration is much more individual — that is the presentation.  To some, it is visually stunning and a real eye catcher.  But to others, having your dinner stare back up at you is off putting.  Put me in the first camp.  I think the visual appeal of a whole roast snapper is rather fascinating.  It is the simplest of presentations, and yet can be attractive and complex at the same time.

One thing that inspired me to want to cook a whole fish was an experience we had about a year ago.  When we were in Italy last year (seems like forever ago!) we went to this seaside restaurant, La Veranda di Giselda in the village of San Vito outside of Polignano a Mare. It is a beautiful open air restaurant on a deck perched above the Adriatic Sea.  There is a pergola covering it to help offer shade.  The last summer breezes and the view were spectacular.  We didn’t know it at the time, but the restaurant would present a significant challenge to us.  It also ended up being one of our very best meals in Italy.

A bit of background, the Elegant Baker is highly allergic to crustaceans.  We didn’t know it when we sat down, but almost everything on their menu was crustacean. This looked like it was going to be a real challenge.  If it wasn’t the only restaurant open, we probably would have left.  We are so glad we didn’t. Our waiter spoke limited English, so we were thankful to have a translation card that explained her allergy.  As soon as we handed him the card, off he hurried, presumably to the kitchen.

Not two minutes later, the chef came out.  His English was much better.  He explained to us that all he had that wasn’t crustacean was whole, fresh fish.  He had several to choose from.  When the Elegant Baker said she would give that a try, the chef disappeared. He came back about a minute later with a tray of whole fish of different varieties.  He then explained what each fish was, how he would cook it, and how it tasted.  It was quite a show, and he was very patient with our questions.

The Elegant Baker chose a branzino, a mild white fish popular in Italian cuisine.  It was  roasted whole and served with lemon.  When the fish arrived at the table, the chef had opened it and deboned it (mostly), but otherwise left it whole.  It was about the best fish the Elegant Baker had.  Coupled with the venue and the care and attention that the chef paid to us, it was a remarkable dinner.

Although I had wanted to cook a whole fish for  a while, that meal was at once inspiring and intimidating.  Inspiring because the fish was delicious and perfectly cooked.  I wanted to  be able to make fish like that.   And it was intimidating because the fish was delicious and perfectly cooked and I had no idea how to do that.   But as it turns out, in the end it was ultimately inspiring and here I am trying my hand at a whole roast snapper.

I’ve made this recipe with Red Snapper, but it is not the only fish that will work here. Other fish will work just as well if that is what you prefer or have available locally. Consider fish such a bronzino, dorada, mackerel, turbot, or other firm fleshed white fish.

The first, and perhaps most important step to cooking a whole fish is buying one.  It is important because if you get a good fish from a reputable and skilled fishmonger, you are virtually guaranteed a great meal.

How to Pick a Fish

Start by selecting the fish.  When buying a fish whole, there are several ‘tells’ that let you know the fish is fresh and perfect for cooking.  First, look at the eye.  If it is clear and glossy, that is a good sign.  If it is clouded or milky, stay away.  The fish is past its prime and not suitable for your needs.

Ask the fishmonger if you can see the gills — they should still be on the fish at this point. You are looking for brightly colored gills.  If they look grey, or murky, again pass.  If you can, touch the fish.  Give it a gentle press on the side with your finger.  In a fresh fish, the flesh will spring back as if your finger wasn’t there.  If you leave a dent in the fish, pass.  Finally, if you can give it a smell, go ahead.  While it should smell a bit of the ocean, it shouldn’t be particularly ‘fishy’ smelling or off.  Those are signs you should pass as well.

If you can’t remember all that, don’t worry.  A reputable fishmonger will be able to help guide you through the selection process. If she knows her stuff, they will cover the same basics with you.  They are also your friend when it comes to preparing the fish.  Most fish sold whole still need some ‘cleaning’ before they are ready to cook at home.  The fish scales need to be removed.  The skin stays, but the scales have to go.  Also, the gills have to be removed, as do the innards of the fish.  The act of removing scales, gills, and guts of the fish is called ‘dressing” the fish.  Be sure to tell your fishmonger that you plan to cook the fish whole and ask them to ‘dress’ the fish for you.  If he doesn’t know what you’re talking about – go elsewhere!!

How Not to Get a Fish

For example, I bought my red snapper at a local ‘whole’ grocery store.  The sign at the fish counter said they would prepare a fish for you to cook whole.  I asked the fishmonger at the counter to “dress” the fish for me.  He finished, wrapped it up and gave it to me.  When I got it home, I discovered he had only partially gutted the fish and not removed the gills.

So the fish wasn’t dressed, and I had to finish the job.  I was not expecting to do that = nor have I done it before.  A number of youtube vids later, and about 15 minutes of muttered swearing, cutting and tearing, and I’d finished.  The rest of the innards were gone, and so were the gills.   But it was not really fun.  SO you really have to be sure your fishmonger knows what he is doing.  I won’t go back to that store for fish again.  Even if they are running a prime deal!

Assuming your fishmonger has properly dressed the fish for you, once you are home the process is REALLY easy.  Here is what I did.  First I took the fish out of its wrap, and set it in a sink partially filled with salty water.  This helps to rinse away any remaining scales or residue from inside the fish.

It also gave me the perfect opportunity to make the chermoula, which takes less than 10 minutes.  I also set aside some parsley and cilantro leaves, and cut four slices from the thickest part of a lemon.

I prepped a baking sheet for cooking the fish.  I covered the sheet with aluminum foil and sprayed with some cooking spray.  Then I turned the oven on to 450F/230C to preheat.

While the oven was preheating, I returned my attention to the fish.  Remove the fish from the salt water and pat dry.  Place the fish on the baking sheet, and make several small slits across the body.  You want to be sure to go through the skin, but not all the way through the fish.  Then rub the inside and the outside with the chermoula.  Be sure to get as much coverage as possible.  Finally, fill the cavity of the fish with the lemon slices and herb leaves you set aside.  That’s it.

When the fish is done, remove from the oven, and squeeze the juice from remaining lemon pieces over the fish. Carefully move to a serving platter with several large spatulas.  Now you have mastered the whole roast snapper!

How to Eat a Whole Fish

So how do you eat a whole roast snapper?  Well, there are several ways.  When we had our fish in San Vito, the waiter made a big show of bringing the fish to the table, unfolding it like he were opening a book, and removing the main backbone.  While impressive, that isn’t necessary.  With the red snapper we made here, we just dug in at the table, each taking a portion from the fish for our own plate.  Eating the skin is optional — I ate it, the Elegant Baker didn’t.  Watching out for bones is not optional.  They will be there, but mostly a minor nuisance.  In fact, just watching out for them helps slow down the whole eating process, making whole fish an ideal “slow” meal.  When you get to the backbone, just remove it.

This fish pairs quite nicely with a roasted carrot and chickpea salad.  Any leftover fish you may have is great the next day in a red snapper salad

When you are done with the fish, you have a couple of options left to you.  First, if there is any fish left, you should remove it and store in the refrigerator, where it will keep for 2 or 3 days.

As for the bones and rest of the fish, you could just discard it.  Or you could use it for the base of a fish stock.  In this case, we discarded it because we didn’t want to make a stock.  There really wasn’t very much left though.  The backbone, some fins, and the head.  The rest of the fish ended up in a meal for us.

I hope you give making a whole roast snapper, or any other whole fish, a try.  It really is a great way to experience a simple process producing a great result.  The flavor was excellent on our fish, and the meat was so tender.  It was easy to feel that we were back along the coast of Italy! 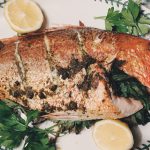