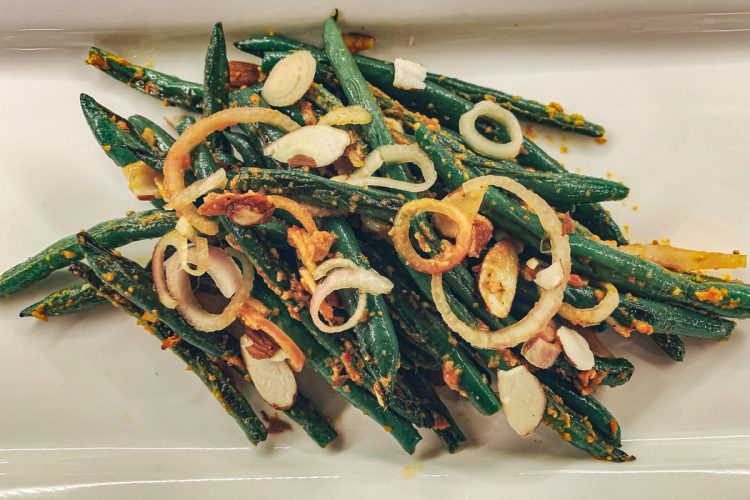 Thanksgiving is one of our favorite holidays.  In a typical year, the Elegant Baker and I host anywhere from 15 to 2o people for a large, family style dinner.  We set up one big long table and we all gather for our meal.  We have a pretty standard menu.   Any suggestions of changing it has always brought some resistance from ‘the regulars’.  I’d like to share some of my Thanksgiving Side Dishes with you, but with a twist.  You see, for as traditional as things can be, this seems like the year to maybe stir up some of those traditions and give something different a try!

I haven’t spent a lot of time dwelling on it here at mezze & tapas, but 2020 has been quite a year.  Each time we come upon an event we’ve ‘always’ done, this year, we can’t.  Traditions have been upset and gatherings have been shelved until further notice.  So we will NOT be hosting our traditional Thanksgiving this year.  Instead, it will just be the Elegant Baker and me.  We will still be gathering with everyone of our extended family via Zoom.  We will spend a few minutes sharing one of our ‘interactive’ traditions.  Except it will be but from an electronically controlled social distance.  It won’t be the same, but it is a way to acknowledge the holiday, and not forget that we are meant to be together.

A chance to mix things up a bit

Since everything is topsy turvy this year, I am going to mix up our usual assortment of Thanksgiving side dishes.  I am adapting a handful and adding  Mediterranean flair!  Over the next couple of weeks, I want to share with you my take on these updated side dishes.  You will not find any of these dishes in the traditional cookbooks of the region.  Most of them don’t have a long and storied past in ‘the old country’.  Instead, they are my own adaptations which feature flavors from around the Mediterranean.  Some might seem familiar because they are not too far out there.  A few may seem a bit more of a stretch, but I assure  you they are also delicious.  So why not give something new a try this year!!

Our standard menu includes a turkey (of course) and two types of ‘stuffing’. (we don’t actually use them to stuff the turkey, so I guess they are more of a dressing.)  We also have boiled pearl onions, green beans, mashed potatoes, gravy from the drippings, and corn bread.  And no Thanksgiving dinner is complete without cranberry sauce.  I make my homemade cranberry sauce and also serve a canned cranberry sauce.

As much as possible, I tried to include recipes that can be made all or partly ahead of Thanksgiving.  I also looked to use the stovetop as much as possible.  Unless you have two ovens, your oven will be pretty busy.  Where you need the oven, have the dish fully prepped and ready to slide into the oven as soon as the turkey comes out.  You will have at least 30 minutes of time for your turkey to rest to use the oven to cook and warm side dishes.

All the recipes can be found at the end of the post.

The first of the adapted Thanksgiving side dishes combines some of the flavors of Spain with the traditional green beans dish.  However, instead of using crisped onions, I substitute a quick pickled shallot for a sweet yet still crunchy taste.  I also lightly toss the green beans with Romesco sauce.  I still had some in the freezer from a previous time that I made the sauce.  If you have that, it is the easiest way to go.  If not, the sauce is quick enough to make up.  The Romesco sauce can be made up to five days ahead.

You also can make the sauce and the pickles ahead of time.  All that’s left on Thanksgiving day is to cook the green beans and assemble the dish.  . While your turkey is resting, use a heavy pan such as a cast iron skillet that you get very hot to blister the green beans.  Toss with some garlic, then remove from the heat.  Of the heat, add some romesco sauce, pickled onions and almonds.  All done.

The next of the Thanksgiving Side Dishes is an update on an old standby at our table. We typically have boiling onions that are, well, boiled.  They are small, white, sweet, and very traditional at our Thanksgiving table.  But I want to replace them this year with some of the a little more color, and the flavors of Italy. So I am experimenting with Red Wine Glazed Shallots.  Balsamic vinegar would be an easy choice to evoke the flavors of Italy, but I wanted something a bit more subtle.  So I substitute a Red wind.  I fortify it with some red wine vinegar to bring a little bit of a tang, and with some honey to bring the sweet.  The honey will also help ensure that as the sauce reduces, it will become a glaze like texture.  A little rosemary, some butter, and salt and pepper, and I think I have a new favorite onion dish.

A couple of notes on preparation.  You can use just about any red wine you like.  Don’t go for the real expensive stuff, but don’t go too cheap either.  Pick a wine you would be happy to serve at your ‘every day’ table.  Oh, and in the Spirit of the dish, make it an Italian wind.  I chose a Primitivo, which is a red that comes from Puglia, one of my favorite regions in Italy.

Also keep in mind that I have prepared this Thanksgiving Side dish entirely on the stovetop.  It is not necessary to use the oven.  I like the stovetop because it gives me a bit more control.  It allows me I to raise or lower the heat to get the effect I want.  I can keep an eye on the shallots and turn them when necessary.  Strictly speaking, you could do this as a baking dish in the oven, but I recommend against it.   Also, these can be made several days ahead and reheated just before service with a quick toss in a pan.  They are also excellent at room temperature, so don’t feel you need to reheat them.

Parsnips Zeytinyağli with Orange and Sultanas

The humble parsnip.  I’ll be honest, I’ve never before used parsnips as a side dish at Thanksgiving.  But I decided to change that up this year and see if I could create a dish with parsnips that could earn a place at the table.  I think I’ve done it, and it leans heavily on the flavors and techniques of Turkish cuisine.

I have been using parsnips for years at Thanksgiving, but they have never made it to the table.  Instead  I use them, along with  carrots, onions, celery,  bay leaves and some herb bunches as a ‘roasting rack’ for my turkey.  I put them all in the bottom of my roasting pan and placed the turkey on top.  The vegetables roast low and slow right into the pan drippings.  This builds an aromatic base right into the pan drippings I use to create my gravy.

This year, however, I’m doing something different and including parsnips with our Thanksgiving side dishes.  In Turkish cooking, there is a method for slow cooking vegetables, particularly root vegetables, submerged in olive oil.  The method is called zeytinyağli, a term both for the method, and for olive oil.  Cooking vegetables this way can turn them into smooth, velvety delights.  Combined with the natural sweetness of parsnips, this side came out much better than I expected.

How to make it

To make this side, place the parsnips in a small baking dish just large enough to hold them.  Add several sprigs of fresh thyme and some orange peel, and cover with olive oil.  Cover the dish with foil and Place in a 300F oven for about an hour to an hour and a half.  You are looking for a knife to easily slide into one of the larger parsnip segments. When you remove them from the oven, let them cool slightly, then remove the parsnips from oil.  Let any excess oil drip back into the baking dish,

To put some nice color on the parsnips, I charred them a bit.  I used my cast iron skillet over medium-high, but any heavy skillet will do.  I put several parsnips cut side down in the hot pan, and let them be until golden brown and charred in spots. It’s about five minutes, and then I turned them for an extra 2- 3 minutes. Repeat until all parsnips are done.

To serve, I spread the parsnips on a small platter, and sprinkled with some golden raisins.  I plumped the raisins in orange juice first.  Using the reserved the juice from the raisins, I added a bit of honey.  Then I heated it for about 30 seconds in the microwave.  Pour the resulting sauce over the parsnips and raisins.  Delicious.

Don’t worry about how much olive oil you use.  I used about two cups for a pound of parsnips in a loaf pan. How much you use will depend on the shape of your baking dish and the size of the parsnips.  Use what you need.  When you are done cooking the parsnips, you can keep and reuse the olive oil. Keep the garlic, but discard the orange peel and thyme.  Strain the oil through a fine-mesh sieve a jar of its own.   You don’t want to mix it with unused olive oil.   Use to saute vegetables or other common uses for the oil

The parsnip can be prepared up to a week ahead,  They can be served either rewarmed or at room temperature. 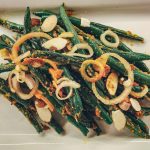 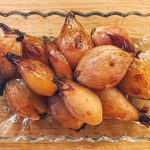 Be careful not to cook the glaze too far so as to burn the sugars.   Glaze left in the pan can be saved and used to top at the table or for dipping.   Shallots can be made up to one week ahead and stored in an air tight container in the refrigerator.  Bring to room temperature or reheat in an oven set on 300 for 15 minutes.  Toss in reserved glaze just before serving. 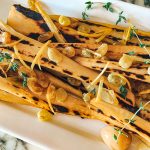 Parsnips Zeytinyağli with Orange and Sultanas

Do Ahead: Parsnips can be cooked in oil 1 week ahead. Do not brown until just before serving.  Let cool completely cover and chill. To finish and brown, let come to room temperature, then reheat/brown on a hot cast iron skillet or saute pan.   Sultanas can be plumped 1 week ahead; cover and chill. NOTE: Strain oil through a fine-mesh sieve into an airtight container; discard thyme and orange peel.  Cover and reserve oil for another use.