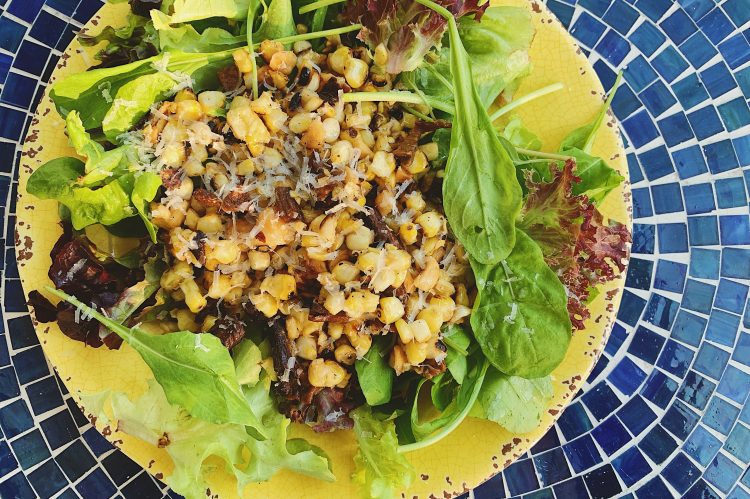 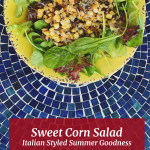 Right now is the best time of the year to indulge in a sweet corn salad. Some things are just better in the summer when you can get farm fresh vegetables. Trying any other time of the year is OK, but the flavor just isn’t the same. A lot like Spanish Gazpacho, sweet corn salad can really only be had in the summer. This salad with Italian inspired flavors and farm fresh goodness is sure to be a hit.

As summer winds on, one of the most enjoyable bounties of the season makes its appearance.  It is the time of year that fresh corn can be had here in the north east.  Of course Farmers’ Markets have a bounty of fresh corn, but so too does my local supermarket.  Still in its husk, a hairdo of silk fronds peeking out of the top. I get mine, though, from a local farm stand that I visit at least once a week. It is a part of their bounty that I regularly avail myself of.

I am not a big corn eater, and typically don’t have much whole corn during the rest of the year.  I’m not a big fan of frozen corn or canned corn, so I just don’t have it that often.  But at this time of year, it finds it way into our menu in a variety of ways.

Fresh grilled corn on the cob – now that is nice.  Top with a little butter, squeezed lime and ricotta salata cheese –  a cookout favorite.  Paired with black beans, it makes a great addition to a salsa.   Roasted corn, sweet bell peppers and lima beans?  Succotash a vintage New World dish that celebrates the season as well.  But for me the best is a sweet corn salad.

This year, I wanted to try something a bit different.  I wanted to try corn in a green salad, and I went looking for my inspiration in the dishes of Italy.  I found a variety of recipes in old cookbooks and on the web that used corn in a green salad.  But nothing quite like what I was looking for. The closest I came was this Corn Salad with Walnuts and Goat Cheese from Dave Pasternack, executive chef at Esca in New York.

I Love Playing with My Food!

While this represented a very good start for me, it needed some changes to make it work more for me.  First of all, I am allergic to goat cheese, so the cheese was going to have to change.  Although I’m sure it’s delicious, I skipped braising the chanterelles.  The extra effort took this out of being an easy weeknight meal.  One more quick change — I thought that hazelnuts would work better for me than walnuts.

I love finding recipes and adapting them for my own or my family’s tastes.  I almost never follow a recipe exactly as written.  I’ll add a little bit of this or a lot less of that.  I may change the method of adding heat or I may replace a main ingredient altogether with something else.  I adapt for allergies or other dietary concerns based on who will be eating the meal.  The point is, I really enjoy adapting recipes, it is one of the joys of  cooking for me.  This one from Chef Pasternack represents another opportunity for me to play.

With all that in mind, I set to work to change the recipe to create my own sweet corn salad.  My goal was to simplify and customize the recipe.  But to do so without losing the wonderful corn focus that I was seeking to begin with.  I wanted to make a recipe that was easy enough for a weeknight.  On the other hand, I wanted a recipe that you could serve to company too.

I start by grilling the corn.  Before I go any further, I want to talk about grilling corn.  Sounds simple enough, just grill it until it chars.  But not necessarily.  First of all, you need to remember there is a BIG flavor difference between ‘charred’ and ‘burned’.  Charred is good, burned is not.  What you are looking for is a dappling of kernals beginning to blacken at the outside most edge.  Not all will get color, and none will be ‘burned’.  What you want to avoid is cooking the corn until each kernel is blackened to it roots.  That is burned.  Keep an eye on your corn and don’t burn it! Turn it as each side colors nicely.  Don’t leave it on any one side for too long.

If you don’t have access to a grill, there are several ways to achieve that ‘grilled’ corn char that is so.  If you have a gas stove top, just place the corn ears directly on one of the grates over a gas flame.  Turn periodically to keep from burning.  This is how I do it because where I live right no doesn’t permit grills.  Another way is to heat a cast iron pan until it is very hot.  Then put the corn on the hot pan.  Like above, keep and eye on it and turn periodically to keep from burning.

Once the corn is grilled, you need to separate the kernels from the cob.  This can be a daunting task, but it doesn’t have to be.  I won’t try to describe the process here because it sounds more complex than it is.  Instead, there are tons of videos on the internet with demos how to do this.  I particularly like this one and this one.  My technique is more like the second video, but on a sheet of parchment paper. I then use the parchment paper to transport the kernels to a bowl.  Use whatever method you are most comfortable with.

After the corn, my first stop was obvious and necessary — find a replacement for the goat cheese.  My first thought when replacing goat cheese in a recipe is usually a sheep’s milk cheese.  Sheep milk cheeses typically share a sharp tanginess with goat cheeses. Both have more of a ‘tang’ than cow’s milk cheese.  You won’t always get the same effect as the goat cheese with a sheep cheese, you can often come close.  If you want, there is no need to replace the goat cheese from the original.  I have no choice though.

But the original recipe called for finely grated cheese, not crumbled cheese.  And there are tangier options in sheep’s cheese than ricotta salata.  One that is usually available in grocery stores is Pecorino Romano.  I tried versions of this salad with both Ricotta Salata and Pecorino Romano.  For this sweet corn salad, it turns out I was more satisfied with Pecorino, so that is what stays.

Pecorino Romano is one of a large family of Pecorino cheeses. IIt is the easiest pecorino to find in the US.  In Italy, any cheese made with sheep milk is a Pecorino cheese. They are usually hard and tangy, with buttery yellow color.  They range from mild to very tangy, and often have a nutty hint as well.  At the markets in Italy, it is common to find ten to twelve different varieties of pecorino cheese.  Some are very local specialties, and some more widely available.  Pecorino cheese is the main flavoring of the famous Italian dish Cacio e Pepe.  (For a good recipe for cacio e pepe check here).

After settling on a cheese, next I attacked the mushrooms.  I love the idea of mushrooms in the sweet corn salad. But I didn’t want all the effort of braising the mushrooms separately.  Instead I thought reconstituted dried mushrooms would substitute nicely with limited extra effort..  For no other reason that they were already in my pantry, I went with dried porcini.  I was very satisfied with the outcome, but feel free to use what you have.

To reconstitute them, put the dried mushrooms in a glass measuring cup.  Poured boiling water over the top to cover by about half an inch.  Let them sit for about 15 minutes to reconstitute.  To manage time, you can do this while working on other parts of the salad.  When ready, pull them from the hot water and give a quick shake to get rid of water on the outside of the mushrooms.  Then proceed to use them for the remainder of your receipe.  In this go ahead and chop them roughly then set aside.

The rosemary oil is a nice touch, but takes some advance planning to make.  To save time on a weeknight, I bypassed making rosemary oil ahead as suggested in the recipe.  Instead, as I was warming my oil, I added a couple of sprigs of rosemary.  When fragrant, I pulled out the springs, and proceeded with the recipe.   No setting aside to cool, just to reheat it.  The rosemary flavor won’t infuse quite as deeply as if you set it aside.  But for a quick weeknight salad the shortcut works fine.

The next step for me was to swap out the greens.  I don’t mind arugula as part of other greens, but I am not a big fan of it as the lone green.  I know that others like it and that is fine — but I find it a bit peppery and bitter to be the only green in a salad.  To replace it, I used a mix of greens from our local farm.  I added a few arugula leaves I had on hand, and a bit of tuscan kale too.  Personally,  I found the flavor more balanced, and less ‘peppery’.  But if you want to stick with arugula, go ahead!  You can also swap out for baby spinach, or even plain old leaf lettuce, go for it.  Use what you like.

[Update:  I just got some farm fresh arugula from my local farm stand.  It is excellent, and well balanced.  I like it very much.  So I won’t write of arugula so easily next time.  Lesson: test your greens and use the ones that work with your dish!!]

If you want to add a bit of sweetness, consider including some cut figs.  Usually, when I make this salad, I include fresh figs, which is why they are in the recipe below.  However, when making the salad for blog recently, there were not figs to be had locally, so I went without them.  I have no photos of the salad with figs, But if you can get them, I urge you to try adding figs.  While the figs add additional color, I really added them because dig figs — fresh or dried.  For this salad, fresh figs are the right call. They balance well with all the other fresh ingredients in the salad.

So when it was all done, you can still see the basic structure of the original salad from Chef Pasternack.  Both the original and mine rely on fresh corn and other fresh ingredients.  They both use earthy mushrooms, and salty cheese to counterpoint the sweetness of the corn. But I hope this post and this sweet corn salad are a great example of how you can modify a recipe to fit your needs.  Food need not be fussy or precise to be good.  Please enjoy and eat well! 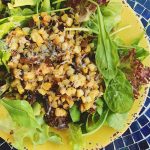