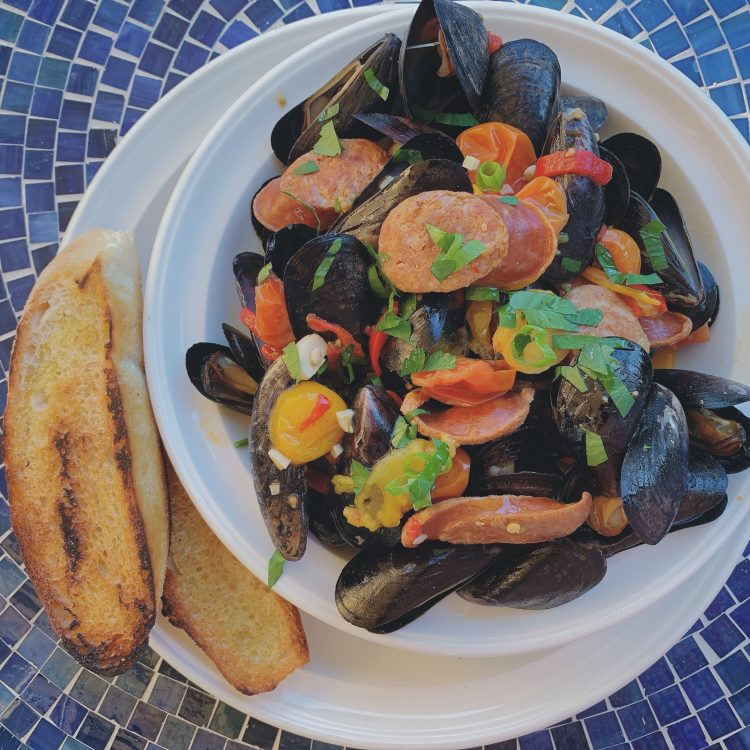 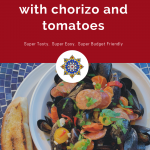 This week’s post is about Steamed Mussels.  As summer steams along, time for another of my favorite meals this time of year.  Steamed Mussels with Chorizo and Tomato Broth.  A quick dish that takes less than 30 minutes to prepare.

Although I grew up in a coastal town, when we had shellfish it was never mussels.  We had clams — steamers, fried, stuffed, with pasta.  You name it.  That is what we had.  No scallops, no oysters, and definitely no mussels.  I don’t think there was a particular reason why, it was just that clams equaled shellfish in my house.

When I look back on it, it was rather surprising.  Mussels were everywhere.  When we went to the beach, we found them on the rocks, on the piers, empty shells, half shells.  The seagulls would pick them up and drop them on rocks to crack them open and expose the meat.  And perhaps that was it — we weren’t going to eat seagull food.

Fast forward to my adult years.  It is possible that I had mussels somewhere along the way, but doubtful.  I moved to and lived in parts of the country not known for their seafood.  If there was fish on a menu, it came from a local river or lake. Nothing wrong with that – it was usually really good. But ocean raised seafood didn’t happen.

The first time I consciously remember having mussels was when the Elegant Baker made them for dinner.  She did the classic French preparation of white wine, garlic and parsley.  Add a nice homemade baguette, and it was wonderful.  The mussels were delicious and to this day this is one of my favorite ways to have mussels.

An ancient and honorable dish

But the classical French preparation isn’t the only one.  Nor is it even the oldest.  In fact records date back to Roman times with recipes for steaming mussels.  The oldest recorded cookbook, Apicius, has a recipe for mussels that are steamed in herbs and wine.  Max Miller from the YouTube channel Tasting History has recreated the Roman version.  If you’re curious, you can watch his video here.

Whether you watch the video or not, the techniques for cooking mussels are pretty much the same.  Put some wine and aromatics in a pot, bring to a boil, add the mussels, cover, and steam for about 7 -8 minutes.  That’s it.  The version the Elegant Baker makes is based on this tried and true formula.  White wine, garlic and thyme were the liquids and aromatics.  Mussels are mussels and time is time.

Each region of the Mediterranean has its own ‘flair’ when cooking the mussels.  That is generally achieved by the choice of cooking liquid and aromatics.  In Provence, the moules marinières  is garlic, leeks, thyme, bay leaf, and white wing.  Sometimes, it includes other treatments.  In Turkey, after steaming they stuff the shells with rice pilaf and serve them.  And in Spain, they are often marinated after cooking to be served as tapas.  Or they are cooked escabeche style.  Check out my recipe for fish escabeche to see more about that style of preparation.

But today, I am taking a different inspiration from Spain.  One that exposes one of my great weaknesses – sausage.  That’s right, we’ll be cooking the mussels with Spanish chorizo sausage.  I’ll also use cherry tomatoes and Spanish Cava as a wine to make a tomato broth for steaming the mussels.  All in all, a fabulous way to prepare mussels.

Not only are mussels delicious, they are good for you too! Mussels have loads of potassium, calcium and iron. They are rich in the heart healthy Omega 3 fatty acids.  And they are low in “bad” cholesterol.  There are 23 grams of protein and only 172 calories in a 3.5 oz. serving of cooked mussel meat. For more about the benefits of mussels, head here.

Mussels are generally “in season” year round, although there are localized peaks and off seasons.  For example, in New England, as much  as I love mussels in the summer, the ‘best’ season is winter.  The quality of the meat is better in the winter because of the reproductive cycle.  In areas of the Pacific coast, there are times in the summer to avoid mussels.  This is because of localized outbreaks of “red tide”.  Red tide is a harmful algal bloom, which introduces toxins into the mussels. The toxins are harmless to the mussels, but can cause food poisoning in humans.

To be sure that your mussels are  safe, you should get them from a reputable seller.  This is a good fish market or grocery store fish counter.  They will only sell you mussels that come from certified shellfish dealers.  The dealers are responsible for managing the health and safety of the supply.  There is another benefit of getting mussels provided by a certified shellfish dealer.  It is that the mussels will already be cleaned and dredged.  That saves you the time cleaning the mussels yourself.

Mussel preparation is quite easy, but there are a few “rules” you have to keep in mind.   For starters, like almost all shellfish, you cook mussels live.  This is because once dead, enzymes in the mussels begin to breakdown tissues, which releases toxin.  Those in turn could cause food poisoning.  Cooking shellfish halts the release of enzymes so no toxins.

Telling ‘live’ from ‘dead’ mussels is simple.  When you are ready to cook your mussels, to be sure they are alive, look for them to all be tightly closed.  If the mussels are open a bit, tap the shell a couple of on the counter or with a spoon.  They are safe to cook and eat if they close, even a little.  If the mussels stay open, they are already gone, and need to be discarded.

The other “rule” is to be sure they cook fully.  The generally accepted advice is that the mussels need to be open after steaming.  If they didn’t open, discard them.  There is some science that says that even closed shells are cooked, but that isn’t universally accepted.  My personal view is that it is best to stick by the old rule of thumb — if they aren’t opened once cooked, discard them.

So back to today’s recipe.  This is my take on a dish I had a number of years back at a local restaurant.  They served the mussels with chorizo steamed in a local beer.  I liked it, but I like the flavor of a dry white wine better.  I added tomatoes to make a richer flavored broth.  It pairs well with the smokiness of the chorizo.

As for which white wine, I chose to use cava.  If you’re not familiar with cava, it is a sparkling white wine from Spain.  Catalunya, the region around Barcelona, produces most of Spain’s cava.  Although the bubble all go away while cooking, they play a nice role in the cooking process.  When first added to the pan, it will froth quickly as the bubble are all released.  I think this agitation of the liquid works in your favor.  It helps combine the smokiness of the chorizo and the sweetness of the tomatoes.

Like all sparkling wines, cava is available in a range from dry to sweet.  I think dry or semi dry is a good choice here..  The tomatoes bring enough sweetness to the dish, so you want a drier, slightly more acidic wine to balance the flavors.

The chorizo I use is a brand available in local grocery stores.  Spanish chorizo is different from Mexican.  Mexican chorizo is hot,  where Spanish is smoky and not hot.  For tomatoes, any small grape or cherry sized will do.  I like to blend red and yellow ones for aesthetics. The colors mirror those of the Spanish flag.

Once the mussels are added, you have nothing to do but wait.  That gives you a good opportunity to toast your bread.  Ah — the bread.  Although a “side-car” in this dish, bread is essential to the finished dish.  It will provide you a tool to mop up all the broth that is left behind after eating the mussels.  But do you toast it or leave it untoasted.  In our very non scientific tests, it doesn’t matter.  I prefer it toasted.  The Elegant Baker likes it untoasted.  My son likes both, for different reasons. So however you have your bread, do not miss it.

Mussels have been being steamed and eaten for quite literally thousands of years.  When a dish is this ‘tried and true’, you have to give it a try.  I think you will love steamed mussels with a chorizo and tomato broth.  The sweet and smoky flavors help to bring out the best in the mussels.  If you give it a try, drop a line in the comments with what you think.  Also feel free to share a picture on instagram and tag @mezze_and_tapas.  I look forward to seeing yours! 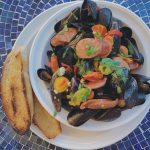 Mussels with Chorizo and Tomato Broth