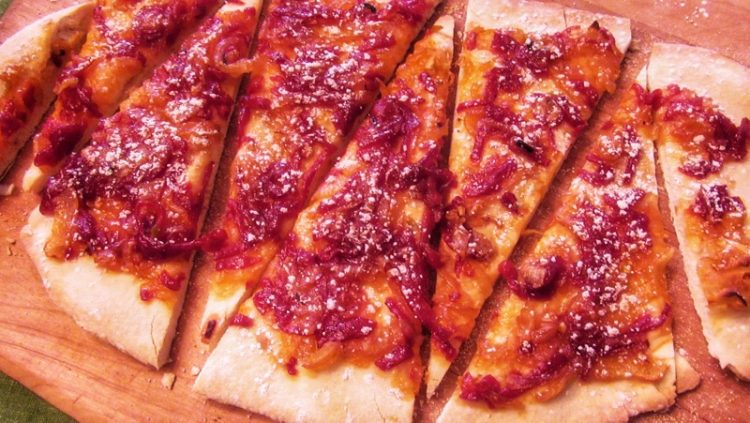 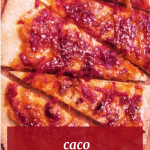 Today’s post introduces the a Spanish pizza called a ‘coca’. A coca is like a pizza, but different.  A Spanish style flatbread, a coca can be served savory or sweet, as a small meal, or as tapas.  There area a couple differences between cocas and pizza. You typically serve a cocas without a tomato sauce base or a cheese topping.   But if you love pizza (and who doesn’t?), then you owe it to yourself to try the a coca.

Like a pizza, there are two basic components to the coca — the dough, and the topping.  The same dough can be used for anything you can think of to top the coca. A coca is served with a thin and crispy crust. The Spanish pizza shape is somewhat free-form, but more of an oblong than a circle.

Of course, the easiest way to make a coca is to start with a store bought pizza dough. You’re welcomed to do that if you’d like an introduction to coca without spending time on a dough. Almost any store bought pizza dough will work, but avoid anything in a cardboard tube. Go to the bakery counter and ask for the dough they almost always have available there.

But what kind of blog would this be if all I did was tell you to go to the store, buy it and heat it up. Not the kind you’d want to read. You’re here because you want to learn and experiment. So — while a store bought dough will be ‘fine’, the real fun is in making your own. It’s quite easy — it only takes some advanced thought.

Here at mezze & tapas World Headquarters, anything that involves a batter or a dough is the domain of the Elegant Baker — and rightly so. She is an absolute wizard with flour/water/yeast/salt/sugar mixtures — and I am pure muggle all the way. Not an ounce of dough magic in me. None. So normally, making coca dough would be the Elegant Baker’s contribution to mezze & tapas. But this time I decided that if I was going to tell you how easy it was, then it had to be easy enough for me to master.

I scoured in internet to find a dough that I could make without the help of a wizard.  (Strictly speaking, that’s not entirely true — there were several “does this look rights?” tossed out for the Elegant Baker to reassure me).   I found the dough I ended up using at Hola Foodie. It is the easiest Spanish pizza dough I found. I converted the measurements and made a few adaptations.

Use a stand mixer

Although Hola Foodie makes the dough by hand, I adapted it to be made in a stand mixer. All dry ingredients go in the bowl first. Run it for several seconds with the paddle attachment to combine them. Then add the water and the oil and start the mixer on the lowest speed. Run for about 30 seconds until you begin to see a cohesive dough. Next, switch to the dough hook, and with the stand mixer on “2”, run for 5 minutes. The dough is ready for the next step when it is smooth and elastic.

Spray a bowl with some cooking spray and add the dough. Cover the top with a towel and put in a warm place until it doubles in size, about an hour. Here’s a trick we use all the time in our kitchen — use the microwave to keep the dough warm while it rises. Put the bowl with the dough in the microwave, and put a cup of boiling water in there next to it. Close the door, and you have what bakers call a “Proof Box” for your dough to rise in.

When I was ready to use the dough, I divide it into 4 equal pieces, then dusted my work surface with a bit of flour. The dough rolled out quite easy. Get it nice and thin (about 1/4 “ in/1 cm) for a crispy crust when you bake it. Before I topped it, I transferred mine to a wooden pizza peel coated with cornmeal. This is so it would be easy to slide onto my pizza stone..

Now let’s talk about toppings for our Spanish pizza.  Once my dough was in the proof box, I was able to use the time it was proofing to put together the candied pepper topping.  A little sweet, and little savory, you’ll be looking for other ways to use this topping after you’ve had it just once.

I can’t begin to tell you the number of times I’ve used this recipe, and every single time it ends up stealing the show. It is the only recipe I use that I led a Federal Judge to question me. I catered a bridal shower for an attorney several years back. One of the guests almost single-handedly cleaned out the candied red pepper appetizer. She cornered me and began asking me a litany of questions about the appetizer. How did I made it? Where the ingredients came from? I endured several more similar questions. Only later did several other guests, including the bride, tell me who the inquisitor was. The inquisitor was a prominent Federal judge who didn’t impress easy.

The recipe for the candied red pepper topping comes from one of my very favorite cookbooks — The New Spanish Table by Anya von Bremzen. Everything I have made from this book has been excellent. Anya captures the vitality of Spanish food and adapts it successfully for the typical modern, North American kitchen. If you want to start a collection of books on Spanish Cuisine, you can’t go wrong by starting here.

In my opinion the one ingredient that ‘matters’’ in this recipe is the sherry vinegar. It is the vinegar that performs the magic that combines all the flavors together. The candied peppers have a nuanced blend of otherwise common ingredients. Don’t substitute something else, and buy the best sherry vinegar you can afford. I use a brand from my local Whole Foods and I always have a bottle of it in the cupboard.

The other topping here is my own recipe for a pulled beef. If you’re going to give this a try, I would make this topping before beginning the dough. The pulled beef cooks for several hours.

This topping is inspired by a Spanish Oxtail stew that I had in Granada, but “dressed down” a bit for a coca topping. Oxtail is a bit too pricey for a tapas though. Instead I’ve substituted a top round steak (often sold as “London Broil”). This cut is a good balance of tough and tender to respond well to slow cooking. I was able to get about a pound of this for about $3.00, so it is definitely an economical option.

For a braising liquid, I created a puree of sauteed vegetables, beef stock, seasoning and tomato sauce. I cooked onion, pepper, garlic, and carrot in a saute pan until they softened and began to brown. I transferred them to a large measuring cup, added the liquid, the seasoning and the tomato sauce. Using an immersion blender, I pureed them into my braising base. A food processor or traditional blender would also work. I recommend watching this video on how to safely use a blender with hot food

Brown the meat, and then put the meat and the base in a baking dish together. Securely cover with a sheet of aluminum foil, slip it in the oven and let it cook at 300°F/165°C for several hours. A nice bonus is that the cooking base can be used as the “sauce” for your caco later. It is the perfect flavor complement for the beef since they cooked together.

When it comes time to complete the cocas, preheat the oven 450°F/230°C. Roll each of the doughs out and spread the toppings on them. Slide them in the preheated oven and cook for them for about 10 minutes each. They are ready when the crust is crispy and beginning to brown around the edges. Easy as that — Spanish pizza.

A couple of garnishes finish these tapas off. With the candied red peppers, before cutting and serving, sprinkle with confectioners sugar. When you pull the beef out of the oven, toss some chopped green onion over the top for color and flavor

One mistake that I made was to put the pulled beef on before I put the coca in the oven. By time it came out, the beef was over cooked. In the future, I will cook the coca for about 7 minutes then add the pulled beef for the last 3 or so minutes. That should heat it through without drying it out.

Pull the coca from the oven and cut it into 8 – 10 thin wedges to serve as tapas or an appetizer.  I do hope that you give a coca, the Spanish pizza, a try. Once you master a couple of basic steps, you end up with the foundation for an endless variety of topping.   And you will always have a delicious appetizer or two that aren’t like everyone else’s! 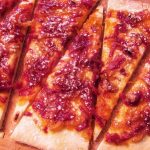 Makes 4 cocas — two of each variety. Serves 2 -4 as dinner, 8 – 10 as tapas.
Thanks for subscribing! Please check your email for further instructions.

Thanks for subscribing! Please check your email for further instructions.