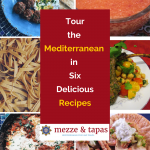 We’ll start by visiting Spain, and making it’s classic gazpacho! Then try your hand at homemade pasta from Italy. Head over to Greece for some tzatziki served with Greek inspired chicken.

Move further around the sea, and come to Lebanon and Syria, and their delicious pomegranate glazed koftas. North Africa is our last stop, visiting Tunisia for its famous shakshouka, an all purpose meal. Rounding out of six meal tour of the Mediterranean, Moroccan inspired lamb ribs with a chermoula marinade and chickpea salad.

An easy Mediterranean food recipe to get started. Gazpacho is a traditional Spanish soup of fresh vegetables and highlighted by sherry vinegar. Served chilled, it is the perfect antidote for a hot summer day! Best when the vegetables are at their peak.

Easier to make than you think, homemade pasta is a great addition to your kitchen skills. Recreate the great taste of Italy. Homemade is the only way to go. Flour and eggs that’s all you need for this recipe. Give it a try, you won’t be disappointed.

Easy, versatile, and delicious are the winning traits that have me coming back to this over and over again.  One of my favorite Mediterranean food recipes, I have served this for family dinners and catered bridal showers. It works well at both casual backyard barbecues and dressed up dinner parties.  Simple and quick, Greek chicken with tzatziki can be prepared and made ahead. This makes it perfect for serving to guests. It is quicker still if you use a store bought tzatziki, but it is much better with homemade. Making your own isn’t that hard and oh so worth it!

The Levant is that area of the Mediterranean between Turkey and Egypt. Often referred to as the “Fertile Crescent”, it is home to some of the best culinary traditions of the Mediterranean. It is where I found the inspiration for the Pomegranate Glazed Koftas. Kofta is Mediterranean answer to the meatball.  It is the quintessential Mediterranean food, found in one form of another in every part of the region.  Kofta is common in North Africa, The Middle East, Turkey and the Balkans.  They are related to the polpette of Italy and the Albondigas of Spain.  In other words, there are fewer foods that are more Mediterannean that the kofta. But some of the best flavors come from the Levant where a tangy pomegranate molasses is a common additon to foods.

Just like koftas, shakshouka is a very Mediterranean dish. It is popular across North Africa, from Morocco to Egypt.  It is wildly popular in Israel. But it has traveled throughout the region. There are dishes so similar to shakshouka that it is hard not to believe they share a similar origin.  In Turkey, there is  menamen, virtually identical to shakshouka.  Bulgaria has mish mash, sometimes referred to as the shakshouka of the Balkans.  Italy has uova al purgatorio (eggs in purgatory).  And the small island of Pantelleria between Tunisia and Scilily that has a dish called Sciakisciuka.  Besides having a name strikingly similar to shakshouka, the recipe itself is quite similar as well.  Spain has pisto manchego, which adds eggplant to the mix.  You could tour the whole Mediterranean in just this one dish!

We finish our tour of Mediterranean food recipes in Morocco, across the Strait of Gibraltar from where where started in Spain. We wrap up with a Moroccan Inspired Lamb Ribs with Chickpea Salad. Two of my favorite foods — lamb and chickpeas became the center pieces of this dish. I relied on two classic Moroccan seasonings to bring it all together. For the Moroccan inspired lamb ribs I first marinate the lamb in chermoula. Then season the chickpea salad with Ras El Hanout, a spice blend that is as unique as it is common in Moroccan cuisine. Together, they provide a rich and earthy flavor profile which give this dish the Moroccan flair.

Six stops. Six dishes. A very Mediterranean culinary tour. There is more to explore — lemons, olives, garlic — but today’s tour was a good start. Check out the rest of my recipes to find more inspirations for your Mediterranean journey!