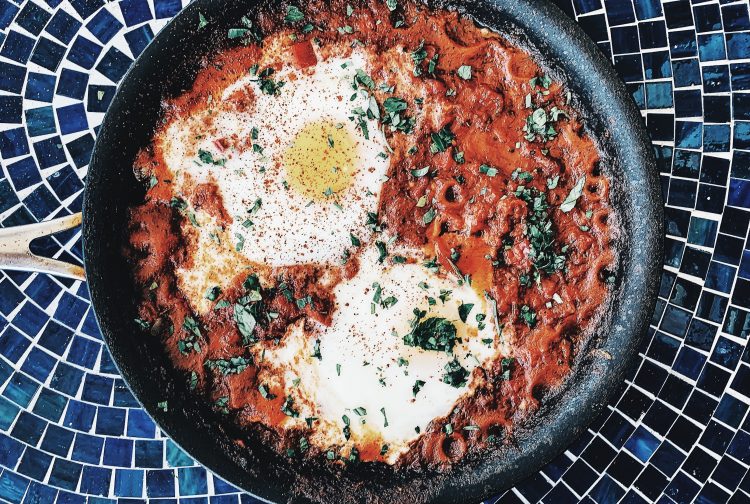 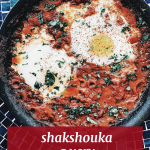 The first time that I had shakshouka it was at a restaurant in Boston for a jazz brunch.  It was one of those funky vibe places where all the food was ‘edgy’ and there was little traditional American fare.  I had never heard of shakshouka, but I was drawn to it because it was served with merguez.  I like merguez, but don’t find it often on a restaurant menu. So as long as there was a promise of good merguez, I was willing to try almost anything.

The sauce was warmly spiced and the eggs were poached.  Not your classic Italian-American tomato sauce.  It was thicker, deeper, and had hints of cumin, paprika, and coriander.  There was a spicy heat that was prominent, but it wasn’t too hot.  On top of that, the eggs were perfectly poached.  It was a darn near perfect brunch dish.

Now that I had tried shakshouka and loved it, I needed to learn more.  Where does it come from? How is it made?  Can I make it myself?  So today I’m going to share some of what I’ve learned with you.

First, I will answer my last question.  Can I make it myself?  The answer is a resounding yes.  And you can make it too.  The dish looks impressive, but it is remarkably easy, and quite flexible in how you make it.  I’ll share my recipe below, but know that you can adapt it to your own taste quite easily.

Where is shakshouka from?

Back to the other questions.  Where does shakshouka come from?  My first clue was that it was paired with a merguez sausage.  Merguez is a North African lamb sausage, similar to chorizo.  So that tells me that the shakshouka is likely of North African origin.  Many recipes call for the merguez to be simmered in the tomato as part of the dish.

I omit the merguez in my version for two reasons.  First, it is not easy to find a merguez sausage in a traditional North American grocery store.  I can find them in my Middle Eastern market, but I shop there occasionally, not weekly.  When I can get some, I do take the opportunity to add them to my shakshouka.  It reminds me of  the original way I had it at the jazz brunch.  But usually I have it with no meat.

Which is the second reason I omit the merguez.  It allows the dish to be meat free.  Because it still has eggs, it is not a plant based dish, and not vegan.  There are recipes for vegan varieties that substitute chickpeas for eggs, but I haven’t tried any.  But I do like the idea of it being a vegetarian meal.  Although I am not a vegetarian, I do try to have several ‘vegetarian’ meals throughout my week, so shakshouka fits that bill.

Returning to the origin of shakshouka.  A quick visit to TasteAtlas confirmed what I thought — shakshouka originated in North Africa.  It most likely originates in what is currently Tunisia, although no one is absolutely certain.  It is quite certain that shakshouka is popular across all of North Africa.  The word “shakshouka” derives from the Arabic word for “mix”, as in a mix of vegetables and eggs.

There are dishes so similar to shakshouka that it is hard not to believe they share a similar origin.  In Turkey, there is  menamen, virtually identical to shakshouka.  Bulgaria has mish mash, sometimes referred to as the shakshouka of the Balkans.  Italy has uova al purgatorio (eggs in purgatory).  And the small island of Pantelleria between Tunisia and Scilily that has a dish called Sciakisciuka.  Besides having a name strikingly similar to shakshouka, the recipe itself is quite similar as well.  Spain has pisto manchego, which adds eggplant to the mix.

Not only does shakshouka exist throughout the Mediterranean, there are almost endless variations.  In Egypt for instance, it is more common to scramble the eggs instead of poaching.  In Israel, they like to top shakshouka with feta cheese.  Bulgarian mish mash has both scrambled eggs and feta cheese.  There are versions that include eggplant, mushrooms, zucchini, and even hummus.

Eggs can be served poached and soft to the point of being runny (the way I like it) or hard cooked through.  The sauce can be thick and paste-like or thin and saucy.  Some versions rely on both onion and garlic in the sauce, and others omit one of them.   The spices usually include cumin, coriander and paprika, but sometimes not.  And of course the heat levels vary from VERY hot to no heat at all.  My preference is on the hot side,

Which brings us to today’s recipe.  The version I rely on most is a mix of peppers, onions and garlic.  I do not use spicy peppers, but red bell pepper.  I bring the heat in my spices.  For tomatoes, it depends on the season.  Most of the year, I use canned tomatoes.  However in the summer when fresh tomatoes are abundant and juicy, I use those instead.  In either case I add a bit of tomato paste to provide some thickness to the sauce.

For spices, I use equal parts cumin, smoked paprika, and Aleppo pepper, and about half a part of coriander.  That balance is right for me.  You can feel free to play with the ratio of your spices as you like.

I use Aleppo pepper for my heat source because I have become a huge fan.  It adds heat, but a more measured heat than red pepper flakes.  Besides the heat, I feel that Aleppo pepper adds flavor as well.  There is a gentle sweetness to the pepper that makes it one of my favorite heat sources.

As for the eggs, I definitely stick with poaching them in the tomato mixture.  Poached eggs is my number one favorite way to have eggs, so I’m sticking with that.  There are two different approaches for poaching the eggs in shakshouka.  The first is on the stove top, with a lid on the pan.   This is by far the most common method used in the recipes I’ve seen over the years.

More control of when the eggs are done

However, that doesn’t work for me.  I prefer my yolks on the very runny side.  But I found  with the “lid on” method, the yolks always cooked too hard by time the whites had cooked.  But I picked up a trick from Jenn Pallian’s blog Foodess a few years back.  Bake the eggs in the oven.  Game changer.  Now, once I add the eggs, I move the entire dish to the oven.   Let cook between 7 – 10 minutes, until the eggs are just the way I like them. The whites cook too.  I’m not going back to the other way.

I do find that I have to take the dish out of the oven while the eggs are still a little bit underdone.  This is because the eggs will continue to cook in the hot tomato mixture even when the heat source is gone.  Find the sweet spot for when the eggs are done to your liking, and pull them out of the over then.

FYI – my pictures only have two eggs because I make a smaller portion when cooking for home. There is just two of us. The recipe is for four.

Take your dish out of the oven, and top whatever way you like.  Some use feta, some don’t. I’ve tried a variety of cheeses, and liked some better than others.  But I usually don’t have cheese at all.  Add more hot pepper.  Shake some buffalo sauce on.  Use some parsley or za’atar.  Make it your own.  People all around the Mediterranean have been doing just that for years.  Why not join in the fun and give shakshouka a try. 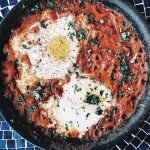 Originating in Tunisia, shakshouka is popular throughout the Mediterranean.  Although it goes by different names in some regions, you can find a variation in just about every corner of the Mediterranean.  And no wonder why.  It is super tasty, super easy to make, and super budget friendly.
Prep Time10 mins
Cook Time20 mins
Total Time30 mins
Course: Breakfast, Lunch, Main Course
Cuisine: Mediterranean, Tunisian
Keyword: Egg, onion, pepper, Tomato
Servings: 4

The tomato mixture can be made ahead and stored in the refrigerator for up to a week. Reheat fully in a skillet prior to adding the eggs and finish as above.  Add Merguez ( or other sausage — Chorizo is nice!) Brown the sausage on all sides in the skillet prior to sauteing the onions, peppers and garlic.  Remove and set aside.  Add back to the pan when adding the crushed tomatoes  Be sure to put to one side to allow room for the eggs.  Simmer with tomatoes for a full 15 minutes to ensure the sausage is cooked through.