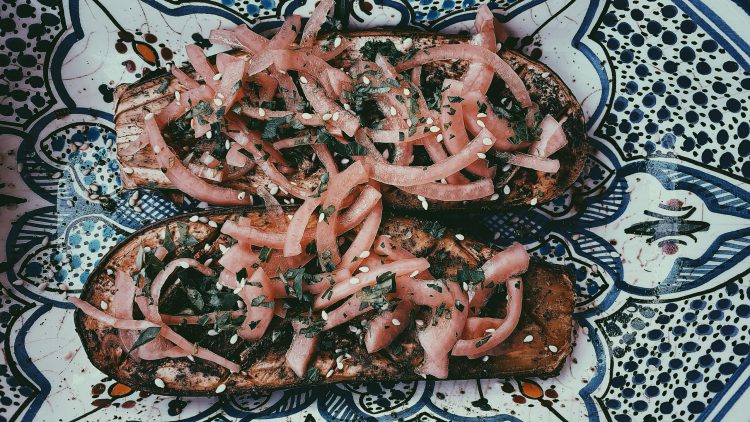 Last week’s post was pretty long, so I’m going to keep this post on the shorter side.  Today, I’m going to be sharing my adaptation of a roasted eggplant dish.  This came about mostly because of what I had on hand.

Recently, I bought an eggplant at the local organic market.  It is a  small one, and enough for the Elegant Baker and me.  I had no idea what I was going to do with it, only that I would use it as a side one evening.  Last night while looking for something else in the refrigerator, there it was.  I came across my lonely eggplant.  It has not yet gone “bad”, but it is definitely beginning to show its age.  I need to do something with it.

As it came to pass, we were planning to have lamb koftas for dinner tonight.  I was using my pomegranate glazed kofta recipe, but swapping the beef for the lamb. But I didn’t have a side planned.  As you can see, I’ve found a perfect place to use the eggplant before it got much older. Time for roasted eggplant with sumac and pickled red onion!

Eggplant is an excellent accompaniment for lamb. The classic Greek dish Moussaka is alternating layers of eggplant and ground lamb.  In Morocco, you can find lamb and eggplant tagines.  An excellent recipe for one is here.  A favorite here at mezze & tapas world headquarters is Yottam Ottolenghi’s Stuffed Eggplants with Lamb and Pine Nuts.   You can find the recipe in his excellent cookbook Jerusalem.  It was an easy decision to pair the eggplant with the lamb for dinner.

Roasting is Great for Vegetables

Let me say that I’m sorry that the eggplant in the ingredients photo below isn’t more ‘picture perfect’.  But given that it is a bit past its peak freshness, it lends itself well to roasting.  Roasting, or cooking with a dry heat, is an excellent way to help heighten the flavor of vegetables.  It is a useful technique of ‘slightly past its prime’ vegetables.

When roasting, the high heat helps to caramelize the natural sugars in the vegetables.  The ‘scientific’ name for this is the ‘maillard reaction’, but you don’t really need to know this to have great results.  But caramelization adds a depth to the flavor  to the vegetable.  That in turn helps to ‘rescue’ a less than perfect vegetable. — like my eggplant.

The other reason that roasting is great is that it is so DANG EASY.  A little prep, add some oil, salt pepper, and seasoning, then put it in the oven.  The oven does the work while you focus on other things.  Like the rest of the meal, or the kids, or a glass of red wine to unwind at the end of the day!

I use roasting with all kinds of vegetables: carrots, tomatoes, asparagus, green beans, broccoli, or potatoes.  The list is almost endless.  Things that don’t like roasting? Not much.  Done right, even leafy greens benefit from a good roasting.  The key to all of them is to keep an eye on the time.  The more firm the vegetable the longer roasting time it needs.

Getting back to the roasted eggplant, I set the oven to 400F.  While the oven was preheating, I cut the eggplant in half the long way.  I made some scores in the fleshy surface of the eggplant to help the seasoning sink in while roasting.

That is the question.  Now, there are two schools of thought on what to do next with the eggplant.  Some will tell you that you need to salt the eggplant and turn it upside down over a colander.  This lets some of the moisture drain away.  Some say it helps cut bitterness in the eggplant.  If you like to salt and drain your eggplant, here is the time to do it.  Let it sit for about 15 minutes before going on to the next step.  Pat the surface dry to get the weeping moisture before seasoning.

The second school of thought is don’t salt.  It isn’t necessary.  I’m in that school of thought and generally skip salting eggplant.  I don’t think that it makes that much of a difference, and it adds unnecessary time.  And I’m not the only one who thinks that way.  I have no issue if you choose to salt, but for me it adds time I don’t have to spare.

Whether you salt your eggplant or not, the steps are the same from here on. Start by seasoning the eggplant.  I use a combination of garlic, salt, pepper and ground sumac.

Ground sumac is a spice that is popular in Mediterranean and Middle Eastern cooking.  It is the dried and ground berries of the sumac plant.  Yup, that same sumac plant you’ve seen in backyards and along highways your whole life.  Well, not exactly.  There are over 200 varieties of sumac worldwide.  While your backyard variety is probably edible, it is not actually the source of the sumac spice.

The spice sumac comes from a specific variety of sumac tree.  That variety is common from southern Italy across to Central Asia. The bright red berries are dried and ground.  The resulting spice has a sharp taste with strong hints of lemon.  It is often used in salads and savory dishes.  Sumac is an element of the Middle Eastern Spice blend za’atar, along with sesame seeds and thyme.  Finally, the bright red color makes for a nice garnish, which we will take advantage of today as well.

Once difficult to find, sumac is becoming easier to come by. I buy mine at a local Middle Eastern market that carries a wide selection of herbs and spices. I know that several of the larger chains in the northeast carry it now. And off course, it is always available online. I have found this Montreal based spice market a good source for online shopping. If you are near Montreal, they can be found at the Jean Talon Market under the name Epices de Cru.

I like using the sumac here because it is complementary to the flavors of the koftas that I will be serving the eggplant with.  It will also add a hint of acidity, which will pair with the oil to give the eggplant the feeling of having been marinated.

So as I season the eggplant, I start with the garlic.  Slice the clove thin, and then slip the thin slices into some of the slits in the eggplant.  If you don’t want to do that, there are other ways to bring the garlic flavor.  Mince it finely or push it through a garlic press and then spread it over the top of the eggplant.  In a pinch, you could also sprinkle some garlic powder on when you add the salt and pepper.

Then sprinkle with sea salt, fresh ground black pepper and sumac.  Brush with a light coat of olive oil.  Put it in the oven, face up, and roast for 30 – 40 minutes, until softened and cooked completely.  The top will be golden colored, and it should be bubbling.   When the eggplant is done, remove from the oven and let cool slightly.

At this point, I garnish the roasted eggplant.  Top it with some toasted sesame seeds, chopped parsley and pickled red onion. One topping I saw over and over on the internet is a yogurt tahini sauce and pomegranate seeds.  Other delicious toppings include  tzatziki, chopped fresh vegetables, or feta cheese.  I have none of these on hand, so I went with what I had that I felt would be complementary to my overall meal,

Regardless of what you choose, I think you will find the roasted eggplant a delicious side.  If you aren’t using already, roasting is a great addition to your kitchen skill.  Remember, it can ‘rescue’ all kinds of past their prime veggies.  But you don’t have to wait for them to be past their prime.  Fresh works great too!  I hope you enjoy the roasted eggplant and return to it again and again.  Until next week, thanks for reading!! 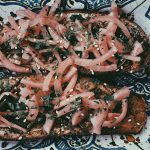