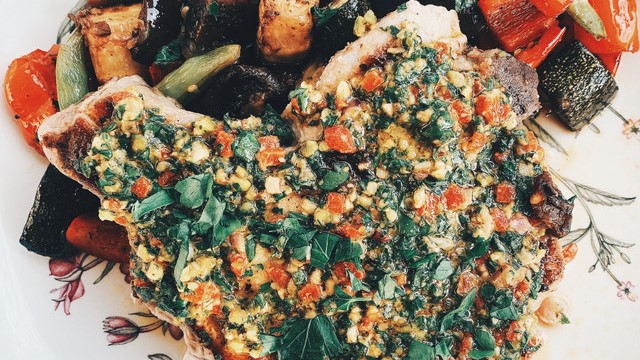 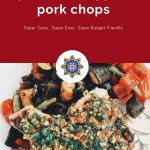 For this dish I seasoned and grilled pork chops and made a pistachio dressing to put on top. This topping goes great with Lamb , Chicken and even Fish. Whatever meat you are eating, give this topping a try.⁠

Pork has an interesting place in the Mediterranean diet. In the south of Europe, it is one of the premier meats in the diet. Yet in the Eastern Mediterranean and North Africa it is virtually non existent.

In Southern Europe (Spain to the Adriatic Sea), pork and beef are the two prime meats. Lamb is present, but not as much as the rest of the Mediterranean. Pork is used in cured meats, sausages, whole cuts, and roasts. Iberico Jamon and Prosciutto are two delicacies that are pork centric.

Geography plays a role in that pork is relatively easy to raise in the lands of the Southern Mediterranean. Religion also plays a significant role. Southern Europe is heavily Christian, primarily Catholic. The Catholic church has no food code restrictions on the consumption of pork.

The fresh herbs and the nutty flavor of the pistachio really complement each other well. They also pair nicely with the pork chops. ⁠
⁠
An Italian Primativo or Spanish Rioja would go nice here!⁠ Tuscan Kale with mushroom is a great side dish here too.
⁠
Below is a quick recipe for the topping . Use about a tablespoon of diced roasted red peppers if you don’t have piquillos. Hazelnuts or almond can work as stand ins for the pistachios if necessary. ⁠ 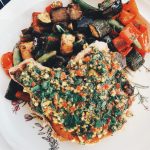