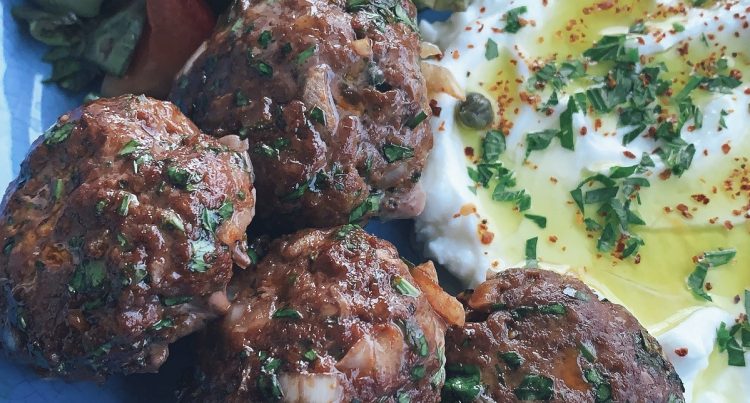 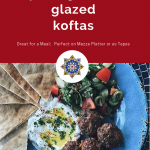 As the spring starts looking more real, it seems like a good time to try Pomegranate Glazed Kofta Patties.   A kofta is a variety of meatball that is popular throughout the Mediteranean.  They can be served on skewers as a kebab, in small balls the size of a falafel, or as a small patty.  Smaller than a hamburger, these patties  are closer to a slider.  The blend of tangy and smoky flavors are evocative of the region.  These Pomegranate Glazed Koftas are sure to become a favorite!

Just about every food culture has its own version of the meatball.  In China you can find the pork Lion’s Head and the beef ball.  Thailand offers the  beef basko and the Philippines has the pork bola-bola.  South Africa has the liver based skilpadjies and Russia has the kotlety.  In the north of Europe, the Swedish have köttbullar (Swedish meatballs at Ikea).  The Danish have the frikadeller. Coming back to the Mediterranean, in Spain you have the albondigas.  In Italy it’s the polpette, and France has the crépinettes

The point is the meatball is almost universal.  But why is this humble food so universal?  For starters, it has been around nearly forever. The first century BCE Roman Apicus cookbook describes an early meatball. So do early Arabic cookbooks.  The Arabs quite possibly learned from the Persians.  Not only are meatballs a very old food, they probably originated in the Mediterranean region.

It is also true that meatballs are easy to make and are relatively inexpensive.  Chopping otherwise poor cuts of meat and mixing them with herbs and vegetables is an old trick.   A cook can make something very tasty from something very basic.  They can also stretch their resources by using under utilized portions of meat to create a meal.  Tasty.  Easy.  Cheap.  No wonder the meatball is so universal.

The kofta is Mediterranean answer to the meatball.  It is the quintessential Mediterranean food, found in one form of another in every part of the region.  So what exactly  is a kofta?  Kofta is common in North Africa, The Middle East, Turkey and the Balkans.  They are related to the polpette of Italy and the Albondigas of Spain.  In other words, there are fewer foods that are more Mediterannean that the kofta.

Call it kofta, kufta, kafte, qofta, kjofte, ćufte, ćufteta, čufti, mesne kroglice, keftedes, chiftea or köfte, it is essentially the same tasty treat cooked from Morocco to Persia and beyond.  The pomegranate glazed kofta combines a tangy finish and with the earthy undertones.

In building this recipe, I found there is a more or less core “base” to a Kofta.  Ground meat, minced onion and garlic, fresh herbs, spices, salt and pepper.  Common meats included lamb, beef, and chicken.  You can also find kofta varieties in fish, turkey, goat, and vegetarian.  Herbs include parsley, mint, and cilantro.  And for spices, I found cinnamon, paprika, allspice, cumin, ginger, and sumac and the spice blend baharat all common.  I also saw “heat” with red pepper flakes, cayenne, and Aleppo pepper occasionally added.

Some recipes called for bread crumbs.  Others called for adding a soaked piece of bread.  But most common, there was no bread or filler.    Similarly, there were a variety of ways to cook a kofta.  Wrapped around a metal skewer and grilled. pan fried, and left as a sphere and put at the tip of a wooden skewer almost like a lollipop.  All these methods came up and more.

Make it Your Own

I decided that the field for what exactly is a kofta was so wide open that I had some freedom for flavors.  As long as I stuck with the core base, I’d be fine.   I also decided that I wanted to make something that would not look out of place on a mezze platter.  For that, I settled on the small patty shape.  As for flavor, I decided to highlight the regional flavors pomegranate molasses and smoked paprika.

One ingredient that might be new to you here is the Pomegranate Molasses. It is an essential ingredient in the foods of the eastern Mediterranean and the Middle East. Pomegranate molasses is made by reducing pomegranate juice until it is thick consistency. Use it to flavor salads, drizzled over roast vegetables and stirred into seltzer and sparkling water. Most importantly for our recipe, it can be used as a glaze for meat. Sadaf and AlWadi are two brands available in the US. You can find it at Middle Eastern markets, in many grocery stores and online

I chose to bake the pomegranate glazed koftas in the oven.  This makes it possible to cook a larger number of koftas at the same time and still control the consistency of the result.  You could also grill them, and they will be quite good that way as well.

There are two other tricks to keep in mind when putting these pomegranate glazed koftas together.  The first is to combine the onion, parsley, garlic, spices, and pomegranate molasses with the salt and pepper before adding the meat.  This will allow you to thoroughly mix the herbs and spices evenly throughout.  Once done, then add the meat and mix to combine evenly.  Be careful not to overmix the beef or it can become tough and gummy once cooked.

Finally,  there  is a pomegranate molasses added directly to the outside of the kofta as a glaze.  It is important not to do this too early, or the glaze will burn, leaving a bad taste.  Do not add the glaze right when you put the koftas in the oven (or on the grill)   I added it for the last five minutes of cooking.  This allows the glaze to be ‘set’ on the koftas without burning it.

I finished my koftas by serving them with some Greek yogurt topped with olive oil and Aleppo pepper and some pita bread.  I also added a side of my versatile tomato, cucumber, olive and caper salad to make a meal out of it.

Spring is emerging and summer is on the horizon.  It is time to start seriously looking at your  outdoor entertaining.  These kofta can easily fit into any plans you make.    The pomegranate glazed kofta recipe is versatile.  Serve them as an appetizer or part of a tapas party.  They are a natural on a mezze platter.   If you want, you can scale the size of your patties up to be sliders or full sized burgers.  You can put them on a skewer and grill them. No matter how you enjoy them, I am confident that the pomegranate glazed koftas will become a favorite you will go to again and again. 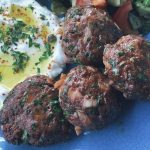 These make a nice addition to a mezze platter or served as tapas.  You can use this recipe, and form the patties larger for ‘slider’ sized burgers, or even larger for a full sized burger.
Thanks for subscribing!