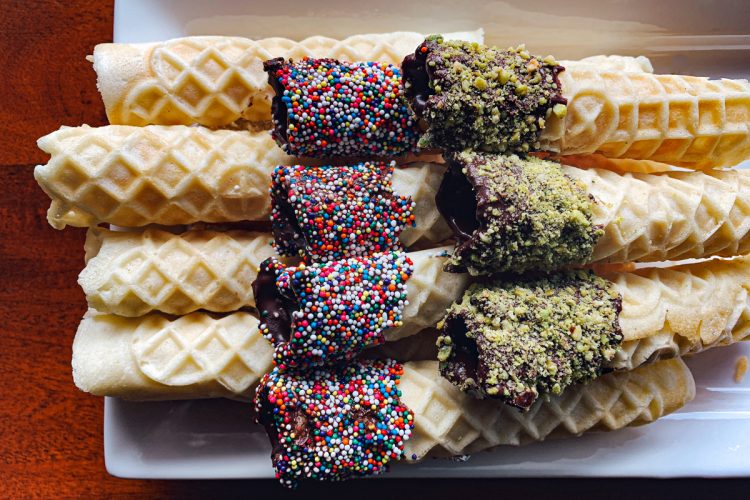 “It’s beginning to look a lot like . . . “ Well, you know the rest. The first snow has fallen here at mezze & tapas World Headquarters. We are right in the middle of our annual “Cookie Season.” Each year the Elegant Baker and I cook close to a thousand cookies to share with families and friends. Somehow, the little touches seem a bit more important this year.  The forced separations of the holiday season gives extra weight to traditional kindnesses.

The extra time at home gives me a chance to experiment with new treats as well. Until recently, almost all our family lived near us, so we seldom traveled for the Holidays. That is beginning to change.   Our children are now adults and are scattering across the country. But staying home feels a bit more isolated this year. For that reason, my experiments are taking me far afield, to the places this blog focuses on.

I have never been to the Mediterranean during the holiday season. I have some ‘Mediterranean” traditions in my past — I did grow up in an Italian American home. We did biscotti, torrone, and panettone. Treats that always seemed to be around included anise cookies. pizzelles and cannolis (always cannolis year round). We were as likely to great family with “Bunoa Natale” as we were “Merry Christmas”. In addition to my own Italian experiences, I also had some enjoyed a few Greek traditions as well. My closest friend was Greek, and I spent lots of time with his family.  They always graciously included me in their holidays as well.

A Delight from Catalunya

So what I’m sharing today I have never personally experienced. I offer my best interpretation from what I have watched and read online.  I do not expect my experiments to be an exact copy of their original.  But I have found a holiday treat from the Catalan region of Spain that really appealed to me. Today, I share my recipe for Neules.  They are a thin rolled wafer traditional for the holidays in the region around Barcelona. They resemble small cigars and are quite delicious.

Barcelona is one of my very favorite cities to visit (perhaps stay a while??), but I’ve not been there at Christmas. I found this treat by looking for Christmas treats in Spain to try.  This is one of the ones mentioned in several places, a recipe is somewhat more elusive.  What I find appealing is that they are traditionally served dipped in cava — my favorite sparkling wine! Anything with cava is sure to be a hit!!

Neules are a close cousin of the ‘barquillos’ common in southern Spain. Barquillos are more commonly rolled in a cone shape. I can also tell you it isn’t too distant a relative of the Italian pizzelle.

There are not very many recipes online in English for neules. Most of what I found is in Catalan. Ultimately, I settled on a recipe I got from a ‘how to’ video made by a Catalan chef. I have translated the recipe, and converted the measurements from metric. The recipe is (by weight) equal parts flour, sugar and melted butter. By weight, there is about one third more egg white than flour as well. Add some vanilla, and there you have it. Just five ingredients.

I did find an English version, but only after I made the version I found in Catalan. It was similar in that the flour and sugar were equal (by weight), and it used vanilla. But it used less egg, less fat (and it used olive oil, not butter) and added milk. I think such a recipe might be thinner consistency, and as such create thinner wafers. However, I have not (yet) tried it.

While the recipe itself is pretty basic, neules are much easier to make if you have the right tool available for cooking. In Catalunya, they use an iron that is made for this purpose.  It is like a cross between tortilla press and one of those ‘flip over’ waffle makers you see at hotel breakfast buffets. The iron is heated over an open flame, the dough is added and pressed. It is common to see these makers arranged in groups of two or three, like in the image below. Cooked for less than a minute, they are then rolled immediately, while still hot and pliable.

The chef in the video above did show a method for using a baking sheet. I tried it, and don’t recommend it. The results are too inconsistent. The wafer was too thin in some spots, to thick in others. The thicker spots were under cooked, and the thinner ones over cooked. It took much longer (6 minutes!) for each wafer, and making them one at a time at that pace would be brutal!

I used a pizzelle maker, which is what we have here. It is my sense that I did not get the neules as thin as you can using a proper tool. I thought they were a bit thick, and that impacted both my ability to roll them easily, as well as the final ‘look’. Mind don’t look exactly like the pictures you find for Catalunya. But I told you from the beginning they would not be perfect copies. What I CAN tell you is that they are delicious! The flavor is sweet and the vanilla comes through nicely.

What I have seen on neules on line is plain, with out being dipped filled. And they are excellent that way. But in the spirit of adding my own festive twist, I did a bit more too. I dipped the tips of several of my neules in melted chocolate. Of those, half I rolled in finely chopped pistachios. The other half, I rolled in small colored sprinkles. They were both festive and delicious!! Not exactly how I saw them online, but I gave it a shot anyway!

One last bit of business from the neules. The recipe I shared calles for seven egg whites. That of course begs the question, what to do with the remaining egg yolks? Well — keeping with the Catalan theme I also made Creme Catalan.  Catalans swear the French stole it from them and changed the name to creme brûlée. There is a long history there! But it is not a fight I’m going to take on.  Let’s just say that Creme Catalan is  really really good! Someday I may make my own version, but for now, whenever I make it I use this one from Lauren Aloise at Spanish Sabores. 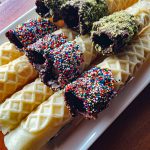 Neules – A Delight From Barcelona

Optional:  Dip the ends of cooled neules into melted chocolate.  While chocolate is still warm, roll in nuts or sprinkles to dress the end.