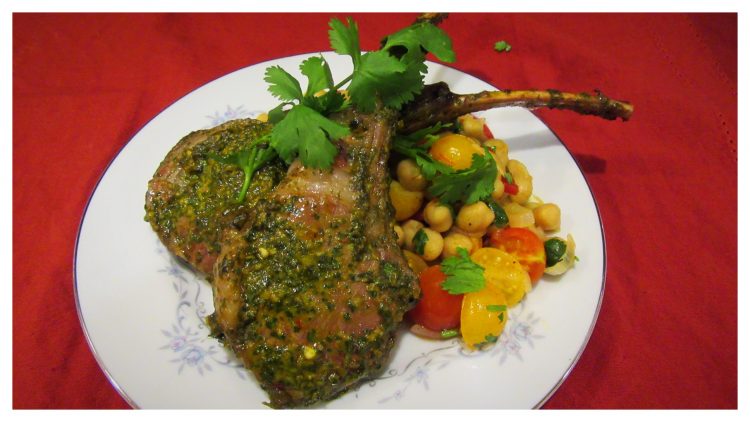 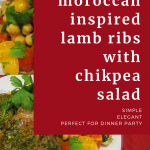 Moroccan inspired lamb ribs is the subject of today’s post. It is not uncommon for lamb to be served in a tagine. Chunks of lamb cooked long and slow in a special vessel are a classic Moroccan dish. However, here is a Moroccan inspired treatment of lamb ribs, paired with a chickpea salad on the side.

Here at the mezze & tapas world headquarters, we are planners. The Elegant Baker and I try to have all the routine elements of our lives planned. The goal is to be less stressed dealing with the inevitable curveballs life throws at you. One way we do that is to have a weekly meal plan, prepared before even starting a grocery list.

A challenge with this approach is deciding  on Monday night “what will I want to eat on Saturday?”  Sometimes that is easier to do than others and this past week, it wasn’t easy at all.  My solution was to offer a Mystery Meal night. In other words “I have no idea now, and hope that I will by Saturday”

I suggested it, so I had to own it. I spent the week thinking about what I could possibly do — and no ideas came. Saturday morning arrived, still no ideas. Then it struck me — I’m starting a new blog.. Why not do something where I can double dip and use my meal as a post. Duh!

I didn’t have time for a tagine — on of Morocco’s signature dishes. I had to be out for most the day, so I needed something quicker. But I still wanted to reflect the ingredients and flavors of an ‘authentic’ Moroccan dish.

Two of my favorite foods — lamb and chickpeas became the center pieces of my dish. I also relied on two classic Moroccan seasonings to bring it all together. For the Moroccan inspired lamb ribs I first marinate the lamb in chermoula. A cilantro based marinade, chermoula is often used on fish. It is also good with a variety of meats and vegetables. Then season the chickpea salad with Ras El Hanout, a spice blend that is as unique as it is common in Moroccan cuisine. Together, they provide a rich and earthy flavor profile which give this dish the Moroccan flair.

The chermoula took less than ten minutes to prepare (including coating the lamb). Once marinating, I had a least two hours before I began cooking. Right after the lamb went in the fridge, I cut the remaining veggies and set them aside in the fridge as well. Just before we were ready to eat, I popped the lamb in the oven (it was already hot from a project of the Elegant Baker)

With the chickpea salad ingredients already prepped, I was able to complete the salad. It came together while the ribs were cooking. Everything would be ready at the same time. Dinner was ready in 15 minutes and took me a world away to Morocco. 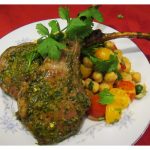 Ras el hanout is a spice blend that literally translates to “head of the shop” implying the very best of the spices the merchant has to offer. Since every shop and every family has their own version of ras el hanout, there is no ‘definitive’ version or recipe. I have my own blend I have been making for years, combining 18 different spices. There is often a version available in the grocery stores — Whole Foods near me carries it, as does Amazon. Alternatively, you can make your own quick blend with spices that are individually easy to find . I make a large batch and store it in an airtight container to use whenever I want to add a Moroccan hint to my meals. Ras al Hanout recipe: 1 tsp ground coriander seed 1 tsp ground ginger 1 tsp ground cumin 1 tsp ground cinnamon 3/4 tsp paprika 1/4 tsp ground cloves
Thanks for subscribing!