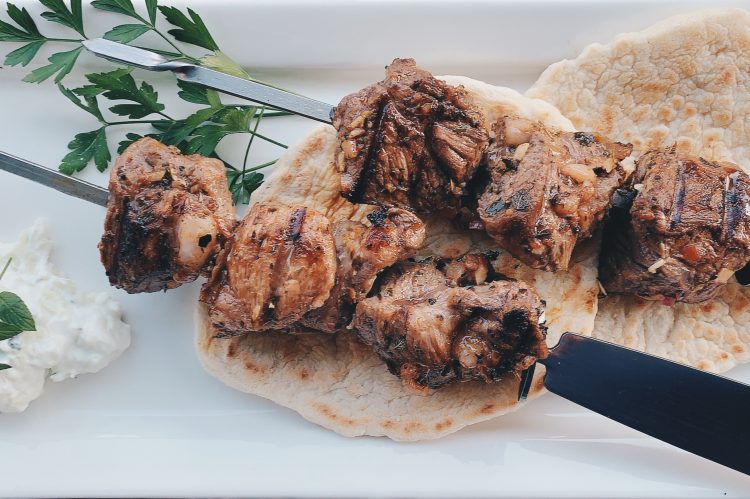 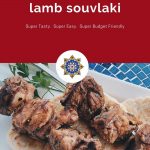 One of my favorite meats is lamb.  It is a bit expensive where we live, so we don’t have it as often as we like.  I believe, though, that we have lamb more than most other people that we know.  One of our favorite ways to have lamb is as Koftas.  Maybe equally as popular here is a Greek inspired Lamb Souvlaki using my homemade marinade.

Lamb Souvlaki is really easy to make and super delicious.  It takes advantage of some of the most common ingredients in Mediterranean cooking.  Yet at the same time lamb souvlaki is the sort of meal that keeps tempting you to have it over and over again!

At its heart, souvlaki (σουβλάκι)is the Greek tradition of cooking meat on a skewer directly over heat.  Archaeological excavations in Greece suggest this practice goes back at least to the 2000’s BCE.  What we can’t know is exactly how the ancient Greeks seasoned the meat they cooked.  But it is pretty clear that they were cooking in this way.  In fact, the very word souvlaki derives from souvla, the medieval Greek term for skewer.

Of course the Greeks aren’t the only ones to cook meat on a skewer.  The kofta kebab is popular throughout the Eastern Mediterranean.  In Spain, sardines cooked on a spear is the popular Espeto.  Beyond our focus region, you will find meat cooked on skewers around the globe.  In southeast Asia, chicken beef and pork satays are popular.  Further east in Japan, the tsekune is a popular ‘meat on a skewer’ dish.  In South America, the churrasco tradition of cooking meats is common.  This practice skewer cooking traces back to the indigenous cultures of that continent.

Why does meat on a stick have such universal and time honored appeal?  It’s pretty easy to guess why.   Particularly when you think about early days when most cooking was over open fires.  Early cooks would have needed some method of putting the meat in the fire to cook, but also to retrieve it to eat. That the practice endures can be chalked up to the fact that it is one seriously delicious way to prepare meat!

Souvlaki takes this tradition and makes it uniquely Greek with the cuts of meat, and the seasonings used.  Souvlaki doesn’t always have to be lamb.  Pork is common in parts of Greece, and chicken and beef seem to make their way into souvlaki recipes.  Although less common you can also find fish souvlaki..

As for a marinade, it relies on some of the Mediterranean’s most universal flavors.  Olive oil and lemon juice are the basis for the marinade.  Then you add seasonings such as Greek oregano, thyme and red onions.  The meat benefits from a long time sitting in the marinade.  Ideally, you can cut and trim the lamb the day before your planned meal, then you can start letting it marinade.  If you can’t get that far ahead, at least plan a good four 4 hours for your lamb to soak in the marinade.

The marinade comes together quite easily.  I start with a 1 cup measuring cup, and add the juice of a single lemon.  I then add about an equal amount of olive oil.  The recipe below has measurements as a guide, but really this is more by feel.  The oil is about equal to the lemon juice, no matter how much juice the lemon provided.  You want to be sure that both your onion and garlic are chopped quite fine or minced.  This increases the overall surface area of both that are exposed to the marinade.  That makes it easier for the marinade to transport more flavor onto the meat.  Finally, add your herbs — definitely oregano and thyme.  I also add smoked paprika (it finds its way into LOTS of my food).  Some recipes call for cumin, which is optional as well.

Whisk all the ingredients together, and now prepare your meat.  A 2 lb/1 k boneless leg of lamb should give you at least a dozen good sized chunks of meat.  Don’t skimp on the size — cut your chunks at least an inch wide and inch and a half long.    I used to put my cut meat in a zip bag then pour the marinade over it.  Then I would throw out the zip bag when I was done.  I no longer do that.  Now I use a bowl large enough to hold the meat and the marinade.  I put the meat in the bowl, then pour the marinade over it.

I then use my (cleaned) hand to mush the marinade all around the meat.  With just a bit of a push, I can be sure the meat is fully submerged in the marinade.  As a bonus, I find that I don’t need to make as much marinade as I used to when it all spread out in a zip bag.   Which is why I had plenty of marinade even though I had only about ½ cup of liquid.  Cover, put in the refrigerator, and let marinate at least four hours.  Overnight is fine, probably even better.

Time to prep the skewers.  If you are using wooden or bamboo skewers, soak in water at least half an hour before using for your meat.  I use metal one, but it doesn’t really matter what you use.  Take the meat from the fridge, and thread on the skewers, two to three pieces per skewer.  I went with three, but two would be fine too.  I don’t usually add vegetables, but you could.  Season the skewers with salt and pepper to taste at this point .  Once the skewers are ready, get you grill or pan hot, and let your skewers rest a half hour or so before cooking.

Believe it or not, I don’t have a grill.  Gas and charcoal grills are not permitted where I live. I can’t bring myself to use an electric grill.  So anything I want to ‘grill’ I cook on a cast iron grill pan in my kitchen.  Given my own preference, I would prefer to cook my lamb souvlaki over a flame on a grill.  But I can’t.  However, the process is essentially the same using a grill pan.  Heat the grill up.  Sear the meat on both sides over the hottest part of the grill, and then move to a cooler part to finish cooking through.

Why the two stage cooking? Using both ‘hot’ and ‘cool’ spots?  It allows you to control both the outside of the meat and the inside much better.  If you cook the lamb over the ‘hot’ zone for the entire time, the results will be uneven.  When the inside is done, the outside will be black and crusty.  You won’t get the nicely browned and lightly charred exterior you should shoot for.  But if you took it off the grill when you had the right color and char, your inside will likely be way undercooked.

On the other hand, if you cook it over the cool part of the grill, your results will be quite the opposite.  You will end up with very little color on the outside of the meat when you finished. The cool heat is just not sufficient to allow proper browning.   Two stage cooking allows you to have more control over both the inside and the out.  Get the color and ‘doneness’ on the outside you want.  And also get the meat properly done on the inside.  Which by the way is 145F or 62.8C.

What to Serve with Souvlaki

As for what to serve with lamb souvlaki, I almost always have some tzatziki on hand.  I think that it pairs really well with lamb.  Actually, I almost always have it with lamb no matter how I cook it.  But it is especially good with souvlaki.  Sometimes, I have pitas, sometimes I don’t.  For the pictures for this post, I did use pitas.  But they are Greek style pitas — without a pocket unlike their Arab cousins.  These pitas were homemade courtesy the Elegant Baker.  Perhaps we’ll post the recipe for them in a later post.  Otherwise, you can buy Greek pitas at Greek markets, and online.  And of course, you can use Arab pitas if that is what is available.  Besides tzatziki and pitas, I often also serve a traditional Greek salad.

One last fun fact. It is primarily in the north of Greece where they call it Souvlaki.  In the south and around Athens, it is more likely to be called kalamaki (καλαμάκι).  In the Athens area, the term souvlaki refers to any pita wrapped meal.  The term kalamaki originates from the Greek term from ‘small reed’.

Whether you call it Lamb Souvlaki or Lamb Kalamaki doesn’t change the fact that it is both easy and delicious. 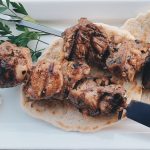 If using wooden skewers, soak them in cool water for at least 3o minutes before putting the lamb on it.