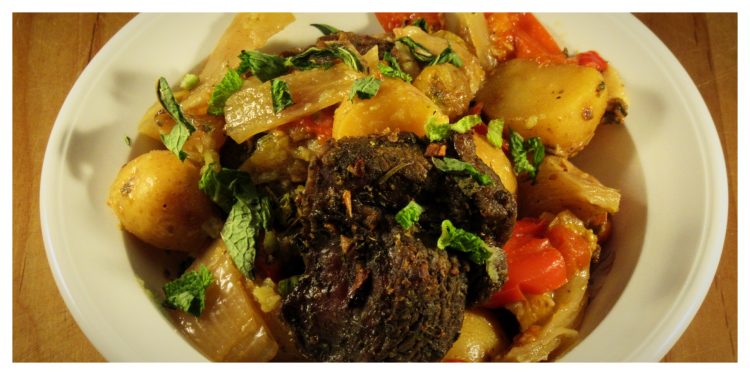 This Easter, I had kleftiko, a Greek slow cooked lamb dish, for dinner. Not my usual Easter fare, but I’m glad that I gave kleftiko a shot.

When I was young, Easter was always a big deal.  It brought church, Easter baskets, chocolate bunnies, and our traditional Easter meal — lasagna. Truth be told, lasagna was our meal for every holiday.  When you are young, you assume your traditions are everyone else’s too.

As you get older, you begin to realize that families and traditions are all different.  My friend Greg gave me one opportunity to learn this. Greg’s family was Greek, and mine was Italian. Greg’s family taught me things that surprised me.  For example, they celebrated Easter on a different day. More shockingly, his family did not eat lasagna, but instead enjoyed lamb. Lamb is quite common in Greek and Mediterranean cuisine. It is often the meat used in celebrations and festivals.

So Easter season rolls around again but no lasagna for me this year.  Instead, I decided to make lamb, and in the spirit of Greg’s family, a dish from the Greek cuisine.   Greek Easters traditionally include a whole roasted lamb cooked over a spit. Not wanting to go that far, I selected a dish called Lamb Kleftiko.

Kleftiko is interesting in that it is cooked inside a parchment paper pouch.  “Klepht” is a Greek word for patriots that were a “resistance” after the Turkish conquest of Greece. The became seen as a sort of patriotic Robin Hood with a bit of a bandit reputation. Legend has it this dish was first made by these bandits. They would steal lambs and cook the meat in a sealed pit to avoid the smoke being seen. This also had the effect of sealing in the juices, making for a very tender dish.

Because most people are adverse to digging pits in their yard for cooking, the modern solution is to create a parchment paper pouch to achieve the same effect.

It is actually easier to do than it sounds. In fact, this whole meal came together quite easily and most of the time was just letting it cook.. I was able to go about my day while the oven did the work.

Right away, I will tell you that both the Elegant Baker and I loved this meal. The flavor of the lemons and the herbs infused every bite in this dish. It was spectacular.

I based my recipe on the many variations that I found around the web. The cut of meat, for example, traditionally includes a bone in leg of lamb. But I saw recipes for boneless, lamb shoulders, and lamb shanks as well. I settled on boneless leg of lamb, because my grocery store had more of them to choose from.

My recipe includes tomatoes. Only a handful of recipes included them, but I like them so I included them. I am glad I did, because one thing I thought when this was done was that there weren’t enough vegetables with it. Without the tomatoes, there would have been even less.

The key to making this dish successful is proper marinating of the lamb.  The infused taste begins with the marinade. Don’t skip adding the lemon zest as well — it helps deliver the flavor later.  I also recommend you put your parchment packet inside a larger pot. A sturdy dutch oven that can be covered during cooking is ideal. I do think that too much liquid escaped as steam from the parchment pouch.  You can help ensure everything stays tender and delicious by covering the pot and limiting how much liquid escapes. 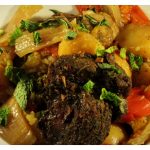