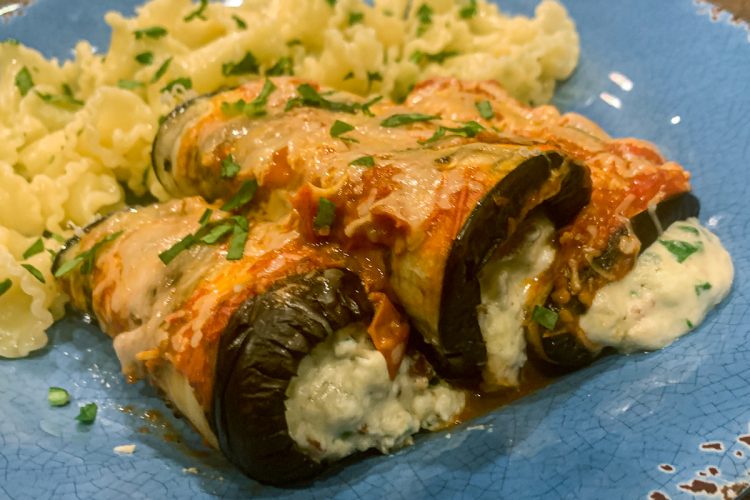 So at my local farmers market, I grabbed some end of season eggplants, and grape tomatoes, and some early fall spinach.  Then I started thinking about what I could do with them.   I started out with the idea of an eggplant Parmesan.  Meaty eggplant slices, rich sauce and nice oozy cheese. Yum!  But I quickly skipped past that idea, because I really didn’t want to go through the whole process of breading and frying the eggplant.   I wanted something a bit lighter.

Keep it easy, keep it light

So I struck on the idea of a modified eggplant roll recipe. Still meaty eggplant slices and nice oozy cheese. But a few changes too.  Skip the breading and frying.  Instead, I’m going to grill my eggplant slices.  And I’m going to use those grape tomatoes and use them to make a sauce base on my roasted tomatoes in balsamic with shallots recipe. So what were making is an Involtini di Melanzane.

This meal is pretty quick and easy to pull together. Most of the time involved is actually just time roasting and baking in the oven.  The actual food preparation is quick.  So that the sauce is ready when you are set to top your eggplant, go ahead and start that first.  While it is roasting in the oven, you can be slicing, grilling, filling and rolling your eggplant.

If you’ve never had involtini di melanzane, you’re really in for a treat.  They are delicious.  Before I even liked eggplant (which is a relatively recent development believe it or not), I liked this meal.  For me, the cheesy filling is what seals the deal.

Besides the cheese, the beautiful thing about involtini di melanzane is how versatile they are.  You can serve them as an appetizer, on an antipasto platter, as a side dish or even a vegetarian main course.  If you like, You can add meat to the filling for meat lovers, which is how I’m preparing them.  You can even use a dairy free cheese to make them vegan.  There are endless variations that you can make.

But lets start with a basic recipe and some basic skills.

What’s In A Name

The Italian word for roll ups is involtini, and for eggplant it’s melanzane.  Put it together and you get Involitini di Melanzane — rollup of eggplants.  You may know this dish, however, by its somewhat common corruption “rollatini”. Same dish, different name.   I have to let you in on a little secret.  I really don’t like the term ‘rollatini” (which you could probably guess when I editorialized it as a ‘corruption’).  It sounds completely made up to me, and for good reason — it is.  Mashing up roll and involtini I guess gives you rollatini, but it just sounds wrong to me.  But go ahead and call it what you will, because it will be delicious either way.

Regardless of what you call them, when making eggplant rolls, their are a one key trick to keep in mind to make the process goes smoothly.  The first thing is you need to par cook the eggplant to soften before rolling.  If you don’t — they will be too firm and won’t roll well.  Often times this is done by frying the eggplant slices.  Sometimes a quick bake.  But today, I take a different approach.

Given that ‘one foot in summer’ feeling, I decided to grill the eggplant slices.  This keeps them a lot lighter than frying, and is quite a bit easier.  No messy egg wash, flour everywhere and a pan full of used oil.  It is also a whole lot quicker.  Just on the grill for about a minute, turn over, thirty seconds to a minute on the second side, and ready.  No setting up breading station, no messy cleanup.  Just straight to a delicious meal.

For the filling, start with the classic ricotta.  But let’s go ahead and add some flavors to the filling to bring more an autum note to our Involtini di Melanzane.  I add a little kosher salt and fresh ground black pepper to start with.  But then I give it a bit of sage for that fall flavor.  Nutmeg and ricotta go naturally together as well, so add a bit of that.  Fresh ground is best, but if all you have is bottled, that’s ok too.  Finally, add some chopped spinach for color and shredded fontina cheese for a nice oozy melt.  Whisk it all together with an egg to a nice smooth consistency and your filling is set.

For my version, I also added a bit more of a twist. I also added bacon and onion to the filling. You can completely skip the bacon if you want – I was kind of going over the top. But keep this vegetarian and omit the bacon. In fact, you can leave out the egg and replace the ricotta and fontina with plant based options, and this dish is suitable as a vegan meal as well.

There are photos of it here, but the recipe below doesn’t include the bacon. First, I want to keep the recipe vegetarian. And second, I really wanted pancetta (not bacon) but wasn’t paying $16 for 6 ounces, which was the best I could find it for locally. That’s about $43 a pound — and NO pancetta is worth that!

Back to the Rolling

Before you roll the eggplant, time to get a landing spot ready for them.  I baked mine in an 8×8 glass dish, but any similar sized casserole dish should do.  Get it ready by spraying the bottom and sides with cooking spray, and setting next to where you’ll be rolling the eggplant.

To roll, place a slice of the grilled eggplant in front of you.  Take a scoop of your filling (I used two tablespoons) and put it on the eggplant.  For best rolling, I’d go about a third of the way up the eggplant and closer to the narrower end.  Once the filling is in place, take the end nearest the filling and gently fold it over the filling.  From there, roll the rest of the way.  Then carefully move your Involitini di Melanzane to the prepare casserole.  Place them seam side down, so that they will hold together during cooking.

Sorry — I had a complete brain cramp and got NO photos of filling or rolling these. DOH!

You should get about seven to eight rolls out of a decent sized eggplant.  I cut eight slices, but I messed up cutting one of them, and ended up with a big gap in the slice, so it wouldn’t hold filling.  So ultimately , I ended up with seven usable slices of grilled eggplant.

For the topping, I took the roasted tomatoes and put them in a large measuring cup.  I then gave it a few quick bursts with an immersion blender to turn it into a chunky sauce.  That is completely optional, and there is no reason you can’t just add the tomatoes over the top of the eggplant as is.

I topped with some more of the shredded fontina and some parmesan.  Some mozzarella would be nice here too, or go ahead and use whatever you’d like,

Pop in an oven preheated to 350oF, and bake for about 20 minutes until the cheese is nicely melted and the sauce bubbles a bit. Take it out and let it rest for a few minutes before cutting into.  This allows the hot cheese filling to settle a bit so it doesn’t run too badly.  It will be a bit oozy — that is what I was going for — but it still benefits from a quick rest.

The grilled eggplant imparts a slightly smokier flavor than a breaded and fried piece would.  I like that, but I have to say my favorite part about this variation is how quickly it goes when you skip the whole breading step.  And to boot, it was delicious.  Exactly the bridge between summer and fall I was looking for.

When you try the Involtini di Melanzane, pop a comment down below to let us know what you think.  Thank you for reading, and see you again soon! 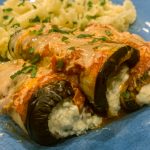 If you want to — take a moment to put the finished roasted tomatoes in a food processor or use an immersion blender to create a more sauce like consistency. Feel free to use any sauce of your choice as a topping.  You will need about 8 oz Replace ricotta cheese and fontina cheese with plant based substitutes and eliminate egg to make a vegan version