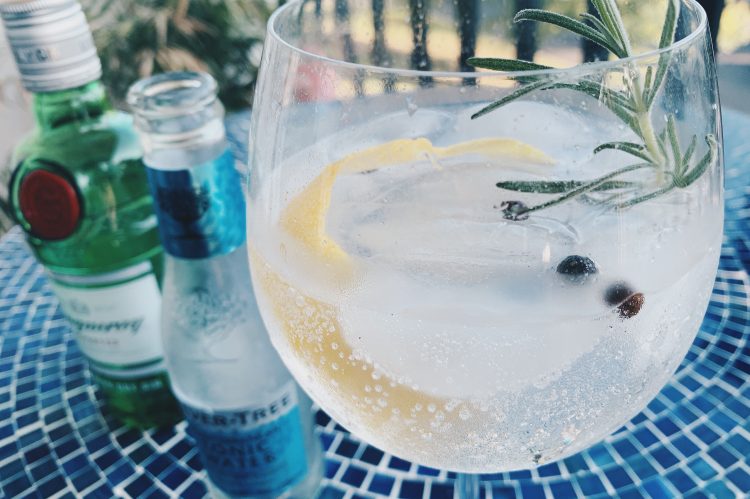 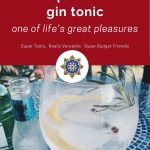 It’s been a while since I’ve done a cocktail recipe here, so I’m fixing that today.  I’m sharing my recipe for the Gin Tonic. For years, my favorite cocktail has been the Gin and Tonic. But it has evolved and I have adopted more of a Spanish Style approach.  My second favorite cocktail is the Negroni.  It seems that my favorite cocktails center around gin.  But my affair with gin and tonic has been around the longest.

I have been drinking gin and tonics since before I was legally allowed to.  I can’t remember when or where I had my first gin and tonic, but it has long been my favorite cocktail.  For a while, it was my exclusive cocktail.  When I was in college, I used to travel to parties with my own G&T cooler kit.  A bottle of gin, several small bottles of tonic, a knife and small cutting board, and several limes.  And my own old fashion glass.

But I’ve branched out to other adult beverages — red wine comes to mind.  I got caught up briefly in the ‘cosmo’ phase for a minute.  But I don’t really drink enough cocktails to be ‘trendy’.  I dabbled in bourbons for a while.  They’re good, but not really what turns my head.  No — I always end up returning to gin.  Now I split my time between a classic Negroni and Gin Tonics.

For the longest time I drank what many consider the classic gin and tonic.  One of the most iconic, and easiest drinks to make — or so you would think.

How do you make a gin and tonic?

True story.  Many years ago I went to a restaurant in Dayton Ohio.  I ordered my ‘usual’ adult beverage, and gin and tonic.  The waitress happily took the order, along with those for the rest of the table, and went on her way.  She came back about 10 minutes later with drinks for most everybody at the table.  Except me.  She had a  rather embarrassed look on her face.  She said something like “The bartender was wondering how you make a gin and tonic.”  My jaw could have dropped.  The recipe is literally the name.  I suspected it was either a prank or a really poor bartender.  Judging by how bad a drink was eventually brought to the table, he was a poor bartender.

I learned quickly that for me there was a ‘right’ way to prepare the four ingredients.  Anything less, and it wouldn’t satisfy me.  You add the ice, then the gin, then squeeze a lime wedge over the gin, and last add the tonic water and let its ‘fizz’ mix the drink for you.  The problem was that too many bartenders just threw the lime in at the end, or stuck it on the edge of the glass.  But the lime was the key ingredient that brought flavor to the drink.  .

Before I go any further, I want to say that for the rest of the post, I use specific name brands of products.  That is not something I typically do, but feel that it is the best way to describe the drink I am making.  Using the product names does not represent a specific endorsement of any product.  I do not have a relationship with any brand I mention, and am not specifically endorsing any products.  I only share what I do because they are what I use and like.  And I think that matters in cocktails.

The particular gin and the tonic both matter in this drink. My taste has evolved there.  At first, I would drink any gin I could get my hands on. I was young, poor, and not exactly “legal”.  But over time I discovered that I really liked Tanqueray.  The tonic was a little easier to get my hands on, but I still went ‘cheap’ and bought a local brand in 1 liter bottles.  Eventually, I gravitated to Schwepps.  It was not necessarily for the flavor, but because they made little 7 oz bottles I could get in a six pack.  The little bottles packed much easier in my cooler.

As for the gin, I eventually moved from Tanqueray to Bombay, and then Bombay Sapphire.  That’s where I ended up.  Bombay Sapphire and Schweppes tonic water.  Over ice, with a lime in an Old Fashioned glass.  So for years, I made a gin and tonic the same way.  Steady.  Reliable. Easy.

As we prepared for our first trip to Spain, I was excited to learn that one of the most popular cocktails in Spain is a Gin Tonic.  I’m not sure why Spaniards drop the “and”, but no matter.  I was to be among my people when it came to cocktails.  And then when I arrived, I learned the drink was similar to mine, but also very different.

To start, the first time I got a gin tonic in Spain it arrived not in an Old Fashioned glass, but in a large white wine stem.  And there was no lime.  No lime!!  That was what MADE the drink for me.  Instead there was some lemon peel.  But from the first sip it tasted even more refreshing than my ‘usual’.  Perhaps it was the ‘vacation’ effect — all drinks taste better on vacation. But after having several of Gin Tonics over our time there, I discovered that I liked them better.

I began to pay attention (when I could) to how they were made.  There is something of a ritual of pouring the gin down the handle of a spoon.  I have not mastered that, and don’t recommend it here.  Seldom was the citrus lime.  Mostly lemon, occasionally orange.  Garnish was all over the place – in a good way.  It was a way for each bar to be creative.  One thing that struck me was that some, but not all, bartenders added some bitters to the drink.  That was a bit of a surprise.

I came home from Spain determined to recreate the Gin Tonic in my own kitchen.  I thought I could have an alternative to my reliable old favorite.  Thus began about a six month journey of trying various gins and tonics in combination.  Here is what I eventually landed on.

I kept the white wine glass — I liked the way it let the tonic water fizz, without everything going straight out the top.  I kept the lemon peel.  The citrus was less ‘aggressive’ than a wedge of squeezed lime.  I dropped the Bombay Sapphire and returned to Tanqueray.  The cleaner, less complicated taste helped to keep the drink fresh and light.  I began adding bitters.  I tried a variety, but settled on Angostura bitters.  Strictly speaking, this isn’t common in Spain, but I like the

So the biggest trick came with the tonic water.  I started with my tried and true Schweppes.  I saw a lot of it in Spain, and had it here.  Turned out way too sweet.  A bit of research and I learned that Schweppes uses different formulations for US and European markets.  That is because they are actually different companies. In the EU, Coca-Cola owns and distributes Schweppes. In the US, Dr Pepper/7-Up owns Schweppes. So ultimately, they are completely different companies. In the US, it is sweeter, using High Fructose Corn Syrup for its base.  The extra sweetness didn’t work in my reworked version of Gin Tonic

Through the ensuing months, I tried a variety of different tonic waters.  Name brands, off brands, and premium brands.  Some were better than others.  One brand I kept coming back to was Fever Tree.  In addition to Schweppes, Fever Tree seemed to be the brand I found most often in Spain.  Fever Tree offers a variety of flavors of tonic water, and I tried them all.  The one that I settled on is Mediterranean Tonic Water.  A close second was the Indian Tonic Water.

The Fever Tree Mediterranean offered the closest taste to what I remember from Spain.  It is made with real cane sugar and the sweetness is much more balanced. The one downside, it is relatively hard to find.  My local bargain grocery store sells Fever Tree products, but not the Mediterranean.  I always have to seek it out, and then I buy several 4 packs so that it lasts a while.

Finally, finish the drink with some garnishes.  I am always mixing these up seasonally and based on my mood.    I’ve used lemon wheels, cucumber slices, rosemary sprigs, juniper berries, allspice berries, mint leaves. The bottom line is go with what you like.

So now my go to Gin Tonic is much more Spanish than American Country Club.  I mostly enjoy it at home since few bartenders in the US make a Spanish variety one.  I did find a restaurant in NYC that did it the Spanish way, but that is rare.  So if you like Gin and Tonics at all, go ahead and give a Spanish version a whirl.  It might just become your new go to! 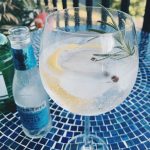 Gin Tonic The Spanish Take on a British Classic