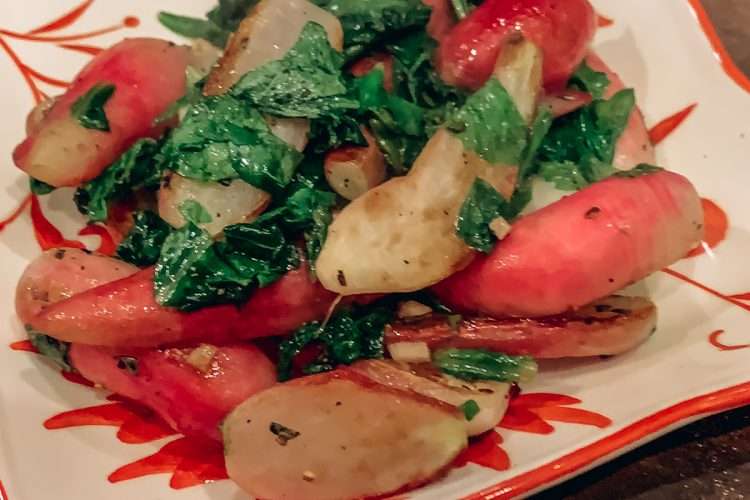 A quick and easy one this time.  One of the wonderful things about Mediterranean food — no matter where you are in the region — it the adaptability.  By that I mean meals focus on what is available in the here and now.  Seasonal and local ingredients are the most important concept in Mediterranean foods.

This is why there are so many similarities and so many distinct cuisines at the same time.  A technique or recipe may be learned from a different region, and traveled with early traders.   But when the idea arrived bak home, it met with some challenges.  No modern grocery stores and no internet to lead you.  Ingenuity and adaptability ruled the day.

A recipe then would be adapted, using the original idea, but using ingredients that were available in the home and season.  So substitute green olives for kalamatas.  Lamb may be substituted for beef.  Herbs or spices may change.  But the underlying dish may still be there.

So why am I telling you this?  Because, as you probably know I am in a new location.  The growing seasons are different.  Things readily available in the Northeast are harder to come by here in the Southeast.  But the opposite is true — things are in abundance here that would be difficult to find before, except for maybe a few weeks a year.

A Second Season of Goodness

Take for example the French Breakfast Radish.  I could reliably get them for about two weeks in the spring in New England.  But here, there is a second season as summer turns over to fall.  They are here at our farmers markets and have been for about six weeks now.  I’m not sure how long this ‘second season’ will last, but I will find out.

If you don’t know what it is, a French Breakfast Radish a cousin to the traditional ‘red radish’.  But there are some key differences that make it my favorite in the radish family.  To start, the flavor is much less aggressive.  I feel traditional radishes are a bit too peppery to really enjoy — I use them sparingly, if at all.  But the French Breakfast Radish is a bit mellower, dare I say verging on sweet.  When ever I can get them, I snap them up because I enjoy the flavor so much more.  The texture is similar, but not identical.

And although you may think that French Breakfast Radishes are common in French breakfasts, that isn’t true.  I don’t eat mine for breakfast.  Instead, I pickle them, I snack on them, and I add them to salads.  Check out my salad nicoise recipe to see how I’ve used them there.  Or for a less traditional take, check out these hakurei turnips.

Like many things, there is an interesting backstory as to how they came to be know as French Breakfast Radishes.  I won’t go into it in the post but if you are interested, there are some places on the web that can help clear up the confusion.  This article here, as well as this one, are good sources of info on the backstory.

What makes them Different

Of course the most obvious difference is the look.  A French Breakfast Radish is longer, and more oblong shaped.  Typically two to three inches long, and shaped like a small tube.  The color is also different in that it is seldom a solid color, and more typically has a gradient from a dark pinkish stem end to almost a white root end.

Like with all radishes, the greens ARE edible, so keep that in mind. We’ll be incorporating some of those radish greens into this dish.  It is also possible to use them to make a radish green pesto.  Not unlike the beet green pesto we shared a few years back, the radish greens stand in for basil.  The different leaves create a different, and enjoyable alternative to the  more well known basil pesto.  I won’t be doing that here today, but know that you can.

While the French Breakfast Radish is delicious eat just as is, a little bit of heat takes them to another level.  The sweetness really comes out when allowed to heat and caramelize just a bit.  They will also soften a bit, but if your careful you can find the sweet spot in texture too. (yes – pun intended).  Cook them just right and they will soften a bit, but retain the nice crunch of a good radish.

Making these couldn’t be simplier. The preparation is an adaptation of a pan roasted potato recipe I’ve used a number of times in the past.   Start with a fresh bunch, including green tops.  Rinse them in some cool water and scrub the dirt from the radishes.  Then separate the radishes from their top and set aside the greens.  Remove the long tail from the root end as well. .  Next cut them in half the long way.

Heat a pan over medium high heat.  Add about two teaspoons of extra virgin olive oil and let it heat up just a bit.  When the pan begins to get warm, add the cut radishes to the pan.  But take a moment to place them all cut side down.  This will allow the exposed sugary inside to nicely caramelize and highten the sweetness.  Leave them this way for about five minutes, undisturbed.

While the radishes cook, chop a couple of cloves of garlic and some fresh herbs of your choice.  I’m using rosemary because its what I had on hand.  Also — take about half of the greens to prep to add to the radishes.  Trim the thick parts of the stem off, leaving just the leaves.  Then cutting across the stack of leaves, cut them into medium sized ribbons.  One quick chop down the center, and you have just the right size pieces.

Turn a single radish over.  If there is a nice golden hue developed, go ahead and turn the rest over.  If not, turn it back over, and cook them all for another two minutes.

When the radishes are nicely browned on the bottom, go head and turn them all over.   Now is the time to add you garlic, herbs, kosher salt and fresh ground black pepper. Toss them all together until the garlic and herbs begin to get a bit fragrant.  That is the time to add the greens you prepared.  Toss them in the pan and just let them sit for about thirty seconds.  At the end of the thirty seconds, turn the heat off, and begin to toss the greens with the radishes.  Cook until the greens are wilted like spinach.

Now you can plate and serve.  I recommend eating this dish warm to hot.  The warmed greens, the delicious flavor and the delightful crunch will having you wondering why you hadn’t made these before — I know it did me.

This whole dish comes together in less than ten minutes.  But it is packed with flavor, color and texture.  It make a wonderful side anywhere you might other wise use potatoes.  It offers a wide variety of nutritional benefits, and it is easy on the budget.

I know these may not be available in your area right now, but they are in mine. So I’ve made my French Breakfast Radishes my seasonal, local adaptation, using radishes in place of potatoes.  I hope you enjoy! 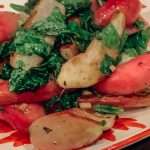