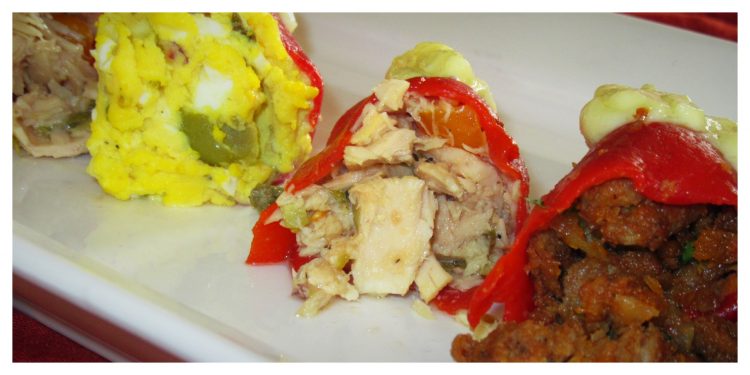 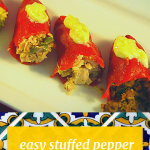 One of my favorite foods is the Piquillo Pepper.  I almost always have a jar (or two) on hand in the refrigerator.   They are the perfect combination of flavor, color and size. Piquillo peppers lend themselves to an endless string of uses in my kitchen.  Straight from the jar, they are a great quick snack. Around the kitchen, I slice them as a salad topper and I dice them as garnish for soups. I have even used them to make a quick roasted red pepper pesto. Of course, they make a great little vessel for stuffed pepper tapas!

Small, triangular shaped and bright red, piquillo peppers are from Spain. They are sweet, with ever so much a hint of heat

Even in Spain you will almost always find piquillo pepper in tins or jars and seldom fresh. Hand picked peppers get smoked, peeled and packed in water or olive oil to preserve them. When you open a jar of piquillo peppers you find a versatile little packet of flavor and color. I get mine at my local supermarket. I find them in the “European food” section (not the “Latin American food” section). They come in a 10 oz jar, and have 10 – 12 peppers in each jar.

Smaller than a traditional roasted red pepper, the piquillo pepper is ideal for tapas. There are almost an infinite number of ways to serve them.  One common way is to stuff the pepper, creating a bite (or two) sized treat. It offers an easy way to create a tasty and elegant tapa or an appetizer. Today, we’ll explore three ways that I often stuff piquillo peppers for a gathering.  These three tapas are my variations on several traditional varieties. Tuna, deviled egg, and chorizo and manchego stuffed peppers. You will find there is a good bit of similarity between the ingredients. As such, it is relatively easy to prep the ingredients once, but end up with three different tapas.

The tuna stuffed peppers is not made with an “American” style tuna salad loaded with mayo. Rather it uses a much leaner Spanish/Mediterranean style tuna salad. I first had this version of tuna in a small cafe in Arta on the island of Majorca. It has completely changed how I prepare tuna now. The salad is heavy on tuna, adds some flavor enhancers, and is held together with a good quality olive oil. The “Majorcan Tuna” is great on a sandwich, in pitas, or as a filling for piquillo peppers. Oil packed tuna works better here that water packed tuna. You wont’t find most tuna in a North American grocery store packed with olive oil though. Instead, ‘oil packed tuna’ uses a vegetable oil. Take the time to seek out olive oil packed tuna. It is the best way to go.

If you can get it, I recommend using a tuna from the Mediterranean. A good one is the Ortiz Bonito del Norte, pictured below.

A light garlic allioli tops all three tapas here. Allioli is a Spanish style garlic mayonnaise used primarily as a topping or dip. In fact, Allioli is the Catalan spelling of aioli, which is used throughout the region. A “true” allioli is a fair bit of effort to make from scratch. It is worth making, and someday I’ll post a recipe. But for time sake, I have included a recipe below for a ‘mock’ style allioli which is quite convincing. Making the mock allioli first so the flavors have time to meld together while the pepper tapas are made.

Of course you can come up with your own variations on stuffing the piquillo pepper.  Other common fillings include crab meat, goat cheese, flavored rice, pulled pork, and shredded beef.  However you choose to stuff them I hope that you take the time to discover piquillo peppers. I’m confident you will enjoy them and they could change your kitchen forever! 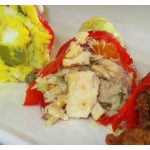