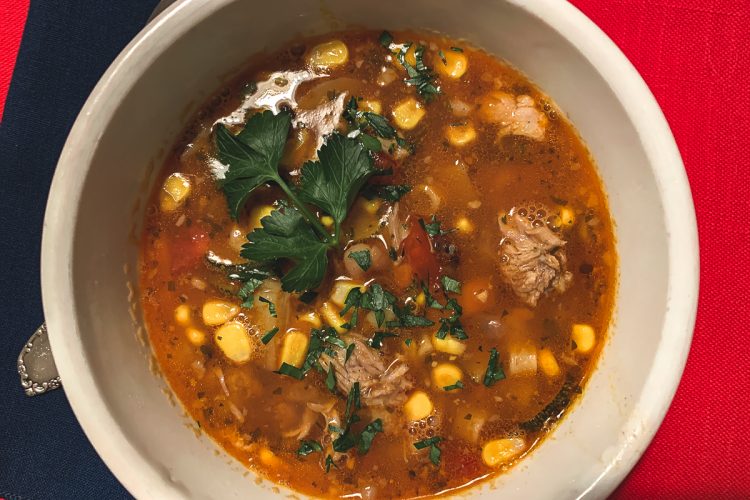 If you remember back to my wrap up at the end of 2020, I shared a few goals that I had for the blog for this year. One of them was to explore some of the less known cuisines of the Mediterranean. Specifically, food from a countries like Croatia, Albania and Malta. I said that I know enough to know that the foods from these areas will largely be similar to their more well known neighbors. But I also know that there are always local and seasonal twists on foods that can make it unique.  And so it is true with today’s post, which is my first foray into meeting that goal. Today, I am making a Croatian Manestra, a traditional stew of vegetables, beans, meat, and pasta. It is as hearty as it is delicious.

Full disclaimer here. I am not Croatian and have never been to Croatia. There are no local Croatian restaurants in my area to try. So while I am confident in my ability to follow a recipe, I will not promise you that this is exactly like what you will get in Zagreb. If you are Croatian and this is nothing like what your Baka would make, I apologize.

Croatian Manestra is a localized version of an Italian Minestrone.  It is also heavily influenced by Slavic and Balkan cuisines.  Manestra  often includes meat, typcially pork, as this on here.  It also includes  corn.  Both of these additions are departures from the Italian minestrone. This makes a stew that is at once familiar and new. This isn’t an ‘accident’.  Croatia and Italy are neighbors and share several culinary traditions.  Croatia is also a Balkan and a Slavic country. It is no surprise that two food cultures meet and mix in this area.

I found many dozens of versions of Croatian Manestra on line. Very few in English. Thanks to Google Translate (which isn’t perfect), I was able to read some recipes in Croatian. I also found several in languages as varied as Italian and Russian.  No two recipes were exactly alike, and in some cases varied wildly. What I have done is pick those elements that in my experience work well together.  I have also tried at the same time to respect the ‘spirit’ of the stew.

Croatian Manestra is a relatively simple stew. It is also what I would call a ’slow food’. Take your time with it and you will be rewarded with a delicious treat. The effort isn’t hard, and most of the time is unattended. For its best flavor, I recommend you make your own stock, which I cover below. I also cover the Slavic ingredient ‘pešt’, which helps bring a depth to the finished stew. Let’s get to the cooking!

Let me start by saying that it is not absolutely necessary to make your own stock for this dish. You can used a prepared chicken stock from a box or a base. Except for setting the beans up to soak, using prepared stock makes this a one night dinner. That said, I really urge you to take the time to make your own stock ahead. And it really isn’t much time at all. Toss a few ingredients in a pot, add some water and let simmer several hours while you go about your life.

The vegetables need no fancy cutting, and no precision. Just cut into two or three large chunks that will fit in your pot. No need to peel either. Keep the skin on the onion. Leave the parsnips and carrots unpeeled.  It’s also a perfect chance to use some scraps or slightly past prime vegetables. Nothing slimy or rotted – that wouldn’t make a good stock. But perhaps a limp celery stalk or a carrot on the edge of getting spongy.

To prepare the stock, start with the spare ribs you’ll be using in the soup anyway. Put them in the dutch oven and add chunked onion, carrot, celery, parsnips and garlic. For this size stock, one or two each sufficed. In my case I cut some stems off of part of a bunch of parsley. I would have just thrown the stems away, but I’d rather make use of them in a stock.  Toss in a couple of bay leaves, and a dozen or so peppercorn. Cover it all with water and bring to a boil. When it boils, reduce to a simmer and walk away. Let is simmer for a hour and a half to two hours.

That’s it.  Now the Pešt

When it is done, pull the pieces of ribs out and put in a container and refrigerate overnight. You’ll use these again in the stew tomorrow.  Then discard all of the vegetables, bay leaves, and pepper corns. You should be left with six to eight cups of ‘pork stock’ for your soup tomorrow. Let it cool a bit, then put is in the refrigerator overnight as well.

One sub ingredient in Croatian Manestra that at first seemed unfamiliar to me was pešt. I spent some time learning about what pešt is. Basically, it is a paste of cured pork, garlic and herbs, often parsley. Giving some thought, I realized that while the makeup is a bit different, pešt is basically pesto. The biggest difference is that fat is different. Pešt uses animal fat, while the pesto you may be familiar with uses olive oil. The is typically no cheese or nuts like a basil pesto would include. The general idea is the same regardless — herbs, garlic and fat reduced to a paste.

While discovering pešt, I also got my first sense of the Slavic influence on the stew. Pešt, or a version of it, is used throughout Slavic and Balkan cuisine. Using animal fat (typically pork lard or fat) in an herb paste is much more common across the Slavic countries. You can find such preparations going by the terms mast in Slovakia, zabela in eastern Croatia, salo in Serbia, and zaseka in Slovina (another of Italy’s neighbors). So pešt is sort of an ‘east’ meets ‘west’ thing — really more Mediterranean meets Slavic. Just a perfect example of how no one culture has a monopoly on great foods!

Most of the recipes that I found for making pešt made large volumes to be stored for later use. I didn’t want a large volume – just enough to make my version of Croatian Manestra. So I looked to create a short cut. I will be the first to admit that this is undoubtably this isn’t exactly authentic. It is, however, a reasonable facsimile that can be used as a short cut. If you have access to authentic pešt, then of course use it. Otherwise try my adaptation.

I tried this with both bacon and prosciutto. I found the prosciutto easier to work with, and the taste wasn’t dramatically different. The flavor comes from the garlic and parsley either way.  This shortcut makes just enough to use in the manestra. Oh, and this isn’t the place for your expensive Prosciutto de Parma either. Save that. What I did was buy a small (4oz) package of the prepackaged grocery store varieties of prosciutto.

I started with half the package, and piled the slices up on my cutting board. Then I began to chop them. As they started breaking down, I added 2 small cloves of garlic and the leaves (not stems) of a dozen or so parsly sprigs. Put them on top of your prosciutto and keep chopping, cutting both into the meat. After 3 or 4 minutes, you will have a pasty pile of meat, garlic, and parsley. Then add a pinch of salt, and fold it the pile of past over itself several times to work the salt in. Done. Now you can add it to the manestra.

In many ways, Croatian Manestra is like most other soups. Start by sautéing the aromatics. Add stock, meat, and beans. Season. Allow to cook slowly for several hours to let the flavor develop.

Once you have the stock and the pešt ready, assemble the other ingredients. Did you soak the beans overnight? Then start your stew like most others. Sautee your carrots, onions, garlic and parsnips in oil for several minutes until just getting soft.

Now here is one of the places all the recipes I looked at were starkly divided. It seemed about 50/50, and there was not middle ground. The issue is when to add the pešt? Do you add it now with the aromatics? Or do you do it later with as a ‘finish’ for the stew. I chose to add it here, and use it to coat the vegetables that I’m softening. I suspect you can’t be wrong though, and either way would work fine. When there is that strong a difference in recipes, there is a good chance both ways are ‘right’. There is also a good chance that each ‘side’ has rationale, and strong adherents. Not a debate I want to have, so I am sticking with adding it now.

Next add your meat, stock, beans, tomatoes and potatoes. Bring it all to a gentle boil. Reduce it to a simmer, and let it go for at least an hour. The beans and potatoes need to be softened. You will be ready when you pull on one of the bones of the spare ribs, and it just pulls out. It will leave behind its meat and flavor. Pull the bones out and discard them. Gently pull the meat apart until it is ‘shredded’.

Add the paprika and corn and cook just until the corn is cooked. Finally, check the seasonings. Add salt and pepper to taste. Add more paprika if you think it needs it. I added cooked pasta (ditalini) here too. Let the whole thing cook about 10 more minutes – or until the pasta is cooked  And now you’ve made Croatian Manestra. Spoon your stew into large cups or bowls and enjoy. It is perfect and hearty and warm and filling on a cold winter night. Enjoy! 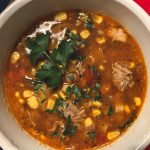